‘The Shape of Water’ Pushes Boundaries 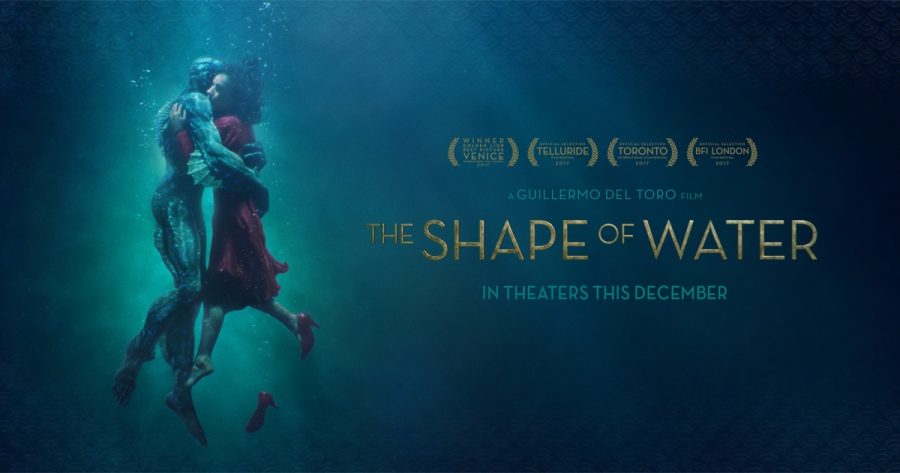 Distinguished director Guillermo Del Toro’s “The Shape of Water” earned an astounding 13 Academy Award nominations, including Best Picture, Director and Actress. The science fiction film conjures images reminiscent of “The Creature from the Black Lagoon,” only with much more finesse, art and feeling.

“The Shape of Water” follows heroine Elisa Esposito (an immaculate Sally Hawkins) through her mundane life as a custodial worker for a foreboding government facility circa 1962. She communicates only through sign language due to inflicted damage to her vocal chords as a child.

Beside the central romantic story, the plot lightheartedly explores several themes including military attitude, race and gender relations and even espionage.

“The Shape of Water” tells a whimsical story of connection and romance, co-written by Del Toro and Vanessa Taylor, is largely accountable for the film’s appeal, but its other nominations are not wrongfully assigned.

Everything about the film, from its production and costume design to its sound editing and mixing, was meticulously planned and executed with Del Toro hovering over.

The creature’s costume, even, was largely budgeted by Del Toro in its initial conceptualization.

The director was inspired mainly by “The Creature from the Black Lagoon,” but took a different approach because his original concept for an expedition-based story with a female scientist as the lead character, “didn’t work,” claimed the director.

“It was going through the same front door that everybody goes through,” said Del Toro. “To go through the service door with the people that are cleaning the bathrooms and taking the trash bins is a completely different story.”

And so Elisa was born.

Del Toro wrote the script with its corresponding actors in mind and met with some personally to propose the parts.

Academy Award winner Spencer said her initial reaction to the script was, “I don’t know how he’s going to do this, but I have to be a part of this film.” Veteran science fiction actor Doug Jones was also approached by Del Toro for his role as the Amphibian Man, and claimed he had complete trust in the director. “I knew if anyone could pull this off it would be him,” said Jones in a Fox Entertainment interview. “I know how much he loves his monsters and putting them at the forefront with storyline and with sympathy.”

The trust actors held for Del Toro transcends on the screen in their complete and successful surrender to their characters.

Hawkins relied entirely on facial expression and movement to convey emotion, and claims she used Esposito’s signed language as “an almost prop, something technical to direct all that passion and energy.”

Del Toro helped Hawkins master silent performance by providing old Buster Keaton, Harold Lloyd, and Stan Laurel and Oliver Hardy films. “Now and then I would ask her to do an Audrey Hepburn on the approaches, because I wanted the movie to feel classic,” said the director.

The film’s “classic” aesthetic is just as impressive as its plot and performances. Paul Denham Austerberry was nominated for his production design work, Dan Lausten for cinematography and Luis Sequeira for costume design.

Del Toro claims all departments worked together to create a look that was “lavish, luscious and colorful.” The film’s prominent green color scheme, genuine costume for the Amphibian Man, meticulous set design, and old-fashioned film techniques add beauty and authenticity to the dynamic story.