‘Dash & Lily’ is Sure to Please

A romantic holiday show for a new generation 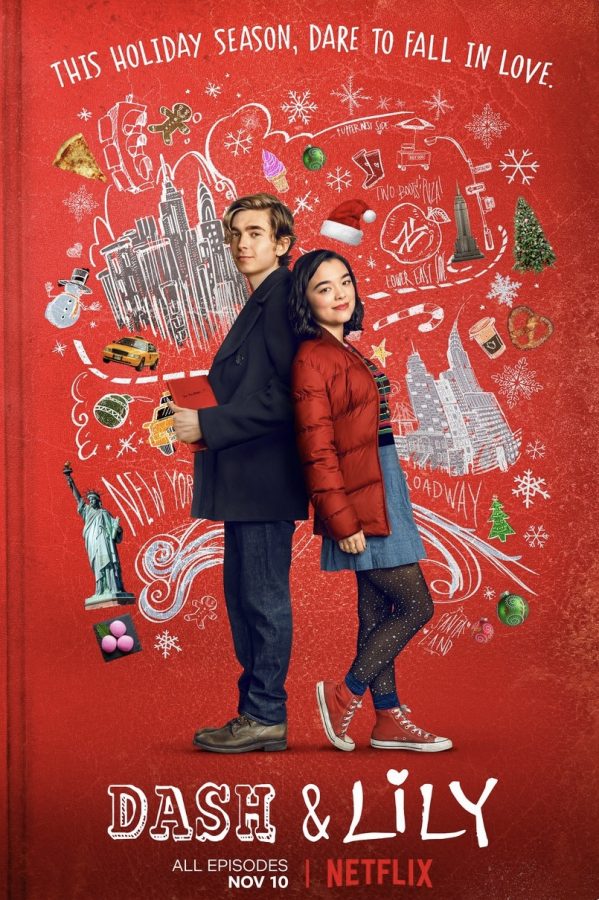 The holidays are right around the corner and what’s better than sipping on eggnog and binging on some romantic holiday features? If you love cheesy Hallmark Christmas movies, this is the show for you! “Dash & Lily,” a new Netflix romantic comedy released on Nov. 10,  is just in time for the holidays to give us something new to watch. This is different from your typical rom-com because it’s not a 90-minute movie that has the same storyline. It is an eight-episode limited series with 25-minute episodes to get you into the spirit of Christmas.

It’s based in New York City and follows two high school teenagers. Dash, played by Austin Abrams, is a 17-year-old who hates Christmas. He describes himself as a loner and a cynic. Lily, played by Midori Francis, is a hopeless romantic who is a huge fan of the holidays and a ball of sunshine. But she is a bit socially awkward because she was never good at making friends her age and would prefer to hang out with her grandfather.

Coincidentally both are alone for Christmas this year. Dash is alone because he would rather be by himself than be with either of his divorced parents out of town. Lily’s parents are going on their second honeymoon to Fiji, and her grandpa is going down to Florida to spend time with his girlfriend. Lily’s brother convinces her to get out of her comfort zone by doing something spontaneous by trying to meet someone who would be interested in the same things as her. They do this by setting up a treasure hunt that is Christmas-themed through a journal in a bookstore.  Dash finds this journal and completes this treasure hunt.

Thus begins their story. They begin getting to know each other through a game of dare throughout the city. But here’s the catch, they never met or even knew each other’s name. The only form of communication is through a journal they are passing along to each other in different parts of the city. Lily tries to convince Dash as to why Christmas is magical while he tries to get Lily out of her comfort zone.

Those eight episodes follow their adventure to find each other. It is a light-hearted show for everyone that gets you in the mood for Christmas. It is a great coming of age show that has the right amount of love and life lessons. For those who love a good rom-com, it’s one worth watching this holiday season.

Gabby Pineda can be reached at: [email protected]