Documentary Review: “Knock Down the House” 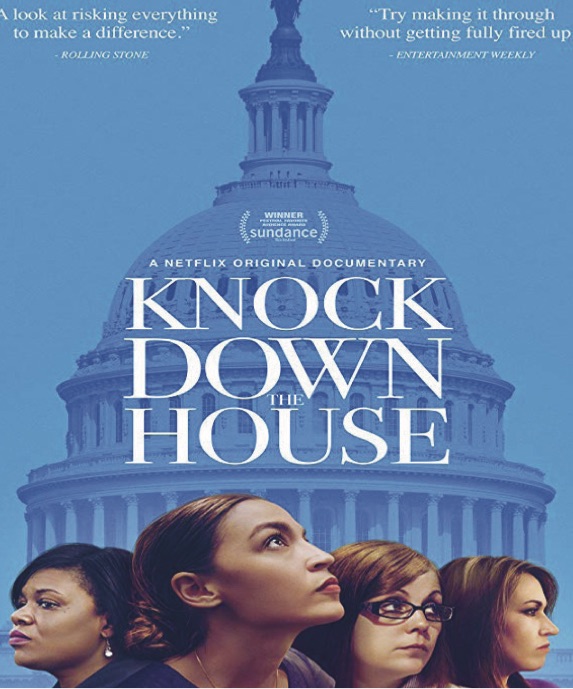 Ladies at GCC, don’t let the patriarchy bring you down! There’s hope and that hope is captured in the Netflix documentary, “Knock Down the House” directed by Rachel Lears. This documentary trails around four, force to be reckoned with, women running for Congress in the 2018 midterm elections. Although, they are all fighting to represent different parts of the country, their main focus is of one to unseat the corruption of established politicians who have been bought by corporate interests—Wall Street, big pharma and real estate developers.

The women featured are: Amy Vilela for Nevada, Paula Jean Swearengin for West Virginia, Cori Bush for Missouri and Alexandria Ocasio-Cortez for Queens. None of these women have ever worked professionally in politics and their motives are not opportunist. National grassroots groups such as Justice Democrats and Brand New Congress are featured in the documentary, diligently recruiting outside candidates to run against established politicians across the country. These grassroots machines are crowdfunded and can be a real opposition to the current institutional power. Their hope, giving back the power to the people.

The documentary begins with the most humbling shot of Alexandria Ocasio-Cortez walking down a mildewy basement staircase, holding a plastic bucket, on her way to the ice machine at a taco and tequila bar in Union Square. After the passing of her father,coupled with financial crisis of 2008, Ocasio-Cortez started working as a bartender to assist her family. She graduated from Boston University, majoring in economics and international relations. Her impressive erudition, sharp tongue and confidence were on full display in a televised debate with incumbent Joe Crowley, leaving him tongue-tied. She is the working class champion and pronounced, “This is not a left/right issue, it’s an up/ down issue.” She goes after the establishment, meeting a machine with a movement.

Paula Jean is from West Virginia, the poorest and sickest state in the nation. She is the daughter of a coal miner and was featured running against Senator Joe Manchin who has earned millions in assets from coal companies. She claims that leaders are in bed with industry and that the people in her state have become “collateral damage.” Her communities are breathing in toxins, their waters are poisoned and massive amounts of people are suffering from cancer and black lung disease, all due to self-serving politicians.

Cori Bush is an African American rebel from Missouri. Her state is number one in murders per capita and top three in African American poverty. She is a registered nurse, ordained pastor and mother. The murder of Mike Brown, by police in Ferguson, propelled her into activism. She states that “The people are now waking up, we can fix our own problems.”

Amy Vilela’s story from Nevada is the most compelling of all. Once a single mom, who with the help of medicaid and WIC worked her way through college, becoming a chief financial officer. Two years prior to running for office, Vilela’s 22-year-old daughter Shalynne died, after the hospital refused to give her the tests she requested for a minor blot clot all because she did not have proof of insurance. In a powerful, tear-jerking moment Vilela states, “No one in this great country should be dying because they don’t understand the intricate system of insurance and why is it difficult? Because of algorithms, because of risk assessment, because the CFOs thatworkinthatfieldaresitting there figuring out ways to make optimum profit for their shareholders. My daughter’s life wasn’t a commodity. I’m not going to allow my daughter to have died for nothing.” 30,000 families a year lose loved ones because they don’t have insurance. She is a crusader for Medicare for All.

These women have a mission and they are mad as hell. They are changing the way we see government and politics in this country. “Knock Down the House” proves that you don’t have to be a politician to run for office. Congress is 81% men, mostly white and mostly millionaires. This documentary exposes the political machines that have been suppressing democracy. We need to take back our government from these self-serving politicians. We must elect working people, so that working people are represented in government. Watch this documentary and empower yourself! The future can be ours, if we really want it.