In his third studio album, "Hollywood's Bleeding," the 24-year-old proves his unconventional nature 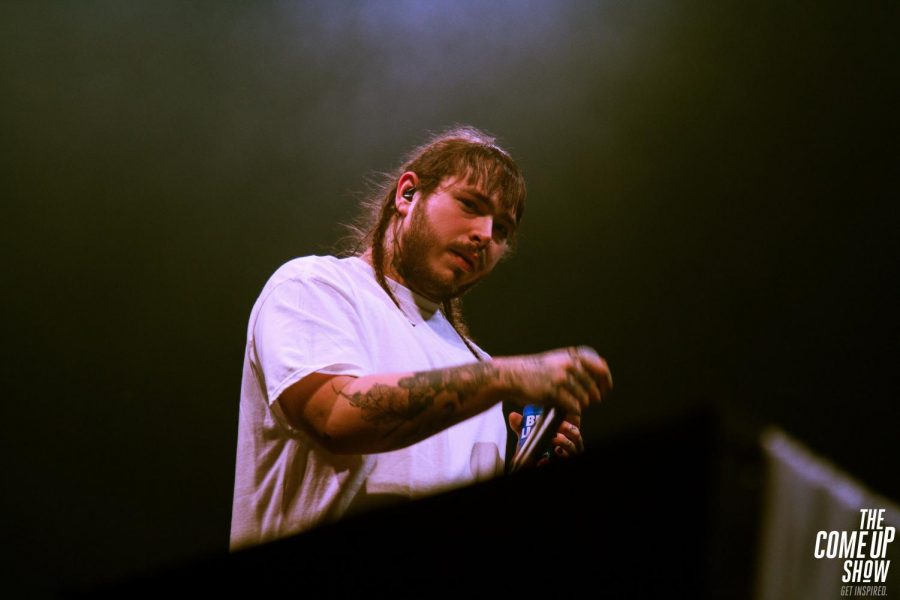 The Come Up Show

THE EVERGREEN MUSICIAN: In this 2017 photo, Post Malone sings at The Come Up Show. The artist has proven that he can evolve as a musician, Gurgen Sahakyan writes in his review.

Post Malone is not an average musician in today’s industry. With his face tattoos and lyrics influenced by his rockstar lifestyle, he is labeled a rapper. However, his music goes much deeper than his image. Post Malone, within the past two years, has become one of, if not the biggest musician in the United States. In his third studio album, “Hollywood’s Bleeding,” the 24-year-old proves his unconventional nature.

The album, influenced by the musical genres of hip hop, pop, R&B, rock, and country, has managed to land at number one on the Billboard 200 Albums Chart, all while producing the largest first-week streams of any album released thus far in 2019.

The 18-song project begins with its title track, “Hollywood’s Bleeding,” sets the spirit of the album as a whole. In this body of work, Post discusses the toxic depression that comes with the Hollywood lifestyle. He talks about how relationships can be staged and filled with unimportant encounters, and with a lack of privacy for the famous.

“It seems like dying young is an honor, but who’d be at my funeral? I wonder,” Post sings, as he mentions the fact that drug use for the younger generation of artists and consumers has been praised. In fact, it has become a major cause in the deaths of young artists like Mac Miller and Lil Peep.

He questions relationships, and if those around him are genuine enough to show up to his funeral, as mentioned above. He wraps up the song with a message that his home, Hollywood, is falling apart.

Perhaps the most anticipated song of the album, “Take What You Want,” features rapper Travis Scott and rockstar Ozzy Osbourne. With different worlds of hip hop and rock colliding, the song instantly went viral and hit top numbers across platforms.

Osbourne beautifully delivers a dramatic rock-like start to the song, which then transitions into Post’s verse, in which he sings, “All I ever asked is for the truth / you showed your tongue and it was forked in two / your venom was lethal, I almost believed you.”

Here, he uses the representation of a snake to compare to his former girlfriend, whose lies had a negative effect on him mentally. As the song continues, the artists point out key factors of failing relationships, until Travis Scott shifts the attention into a different approach to relationships. This Houston artist raps about the lifestyle of enjoying himself with many women around. The song comes to an end with an emotional electric guitar segment performed by Andrew Watt.

Post Malone continues on the album with very high quality, emotional and melodic songs, such as his mega-hits, “Sunflower” and “Goodbyes,” featuring Atlanta rapper Young Thug. The album is finished off with his hit single, “Wow,” which was released in late December of 2018.

“Wow” gives a different message than the rest of the project. With lines like, “You was talkin’ sh-t in the beginning, back when I was feelin’ more forgiving,” and “Hunnid bands in my pocket it’s on me,” the New York artist speaks about the hate and negativity he faced at the beginning of his career. Despite all the hate, he has become a top-selling, wealthy artist.

It seems that Post decided to finish his emotional project by reflecting how despite its negatives, Hollywood has birthed his career and changed his life for the better.

With the groundbreaking accomplishments this album has achieved, Post Malone has gotten one step closer to the history books. With his debut album “Stoney,” breaking Michael Jackson’s “Thriller” record for most weeks spent in the top 10 of the hip-hop/R&B albums chart with 77 weeks, to breaking the Beatles’ record for most simultaneous top 20 hits on the Billboard Hot 100 with 9, it is evident that Post Malone is an evergreen musician. Especially if he continues to produce such high-quality albums like his first three.

Gurgen Sahakyan can be reached at [email protected]