A ‘Battle’ Worth Watching 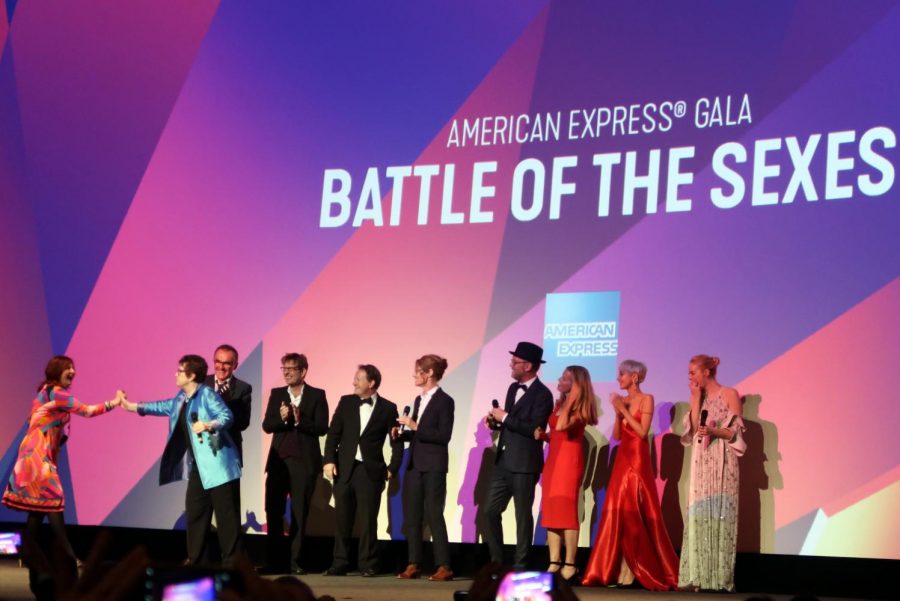 At first glance, “Battle of the Sexes” looks like another addition to the plethora of contemporary films and television shows dedicated to the sudden surge in feminist content. But directors Jonathan Dayton and Valerie Faris (“Little Miss Sunshine”) and writer Simon Beaufoy (“Slumdog Millionaire”) managed to make it much more than that.

“Battle of the Sexes” retells the widely viewed 1973 tennis match between Billie Jean King and self-proclaimed “male chauvinist pig” Bobby Riggs. The match itself, however, is not what makes the movie. The intricate self-discoveries made by the two opponents before and after the match set the film apart from its fem-driven counterparts, such as “Atomic Blonde” and “Wonder Woman.”

Emma Stone provides a subtle and nuanced performance as the then 29-year-old King and Steve Carell expertly balances Riggs’ emotional highs and lows.

According to the film, King’s major troubles begin when she meets charming hairdresser Marilyn Barnett (Andrea Riseborough). Barnett forces the young tennis player to reexamine her sexuality and, until then, happy marriage to Larry King (not to be confused with the television host).

King’s complicated romantic situation affects her game, and a phone call and proposition from compulsive gambler Riggs only adds to her vexation.

But after Riggs easily and haughtily beats another female player from the tour, King decides to take the challenge. The sportswoman must then train for an enormous statement-making match while dealing with a self-identity crisis and several outside pressures.

While King sees the match as a defining moment for women’s lib, Riggs’ investment is more financial. The 55-year-old hustler considers the match a publicity stunt perfect for regaining some money and his estranged wife’s respect.

The match’s outcome is already known because the film is, after all, a retelling of true events. But Academy Award winner Stone did not let that influence her performance. “I tried to create a capsule of this human being at this point in her life without the retrospect she has now,” said Stone in a Sports Illustrated interview. “I was watching footage from the time, reading interviews from the time, basically everything before [King was] the age of 29.”

Carell’s challenge was ensuring Riggs did not come off as the supreme antagonist. “He’s a self-promoter who saw a way in and capitalized on it,” said the actor. “He’d say these incendiary things but most people didn’t take it seriously because they knew his heart wasn’t connected to that. He’s a showman.”

If Carell’s performance does not clarify who the real antagonist is, writer Beaufoy does during a scene with King and Kramer. The athlete threatens to withdraw from the match if Kramer is a commentator, because his bias might influence viewers.

Kramer was a highly-regarded figure but with backward thinking when it came to gender equality in the sport, and his conflict with King is still relevant to contemporary society.

“I think traditional media is still controlled by men,” said the now 73-year-old King to Sports Illustrated reporter Jon Wertheim. “When I went into a conference after a match, there were no women in the news at all. We need that to be more 50-50 and reflective of America.”

Though times have changed, Time magazine reported that “male journalists make up 63 percent of bylines in print,” and “news is anchored by men 60 percent of the time,” just three years ago.

Stone claims the film’s content is relevant to her and all women “because women are on the receiving end of less pay.” “We still have so far to go,” said the 28-year-old actress.

“Battle of the Sexes” therefore tackles old and current societal issues, all while providing compelling character studies of King, Riggs and Kramer.