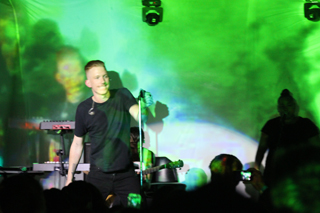 Hassle, 26, is a singer-songwriter who has made his way from Stockholm, Sweden to London to Hollywood, where he currently resides.

Hassle has been active in the music business for about seven years with his Swedish record label, TEN Music Group.

It was at Rytmus High School in Stockholm, which he attended between 2004 and 2007, where it all started.

He described his time in high school as rather blurry, since his interest in academics was running low.

“I was lucky to attend a school where we spend so much time playing music,” he said.

Looking back today, he said he really did not spend much time in school itself; however, one day was enough to change his life as he knew it.

During his senior year, students were required to put on a 30-minute performance and Hassle was asked to be one of the backup singers for a friend’s act.

But due to a lack of motivation, he missed out on all of the rehearsals. On the day of the performance, he made a last attempt to miss the show by coming in late.

However, when he arrived at school, his friend approached him in the corridor, telling him it was their time to enter the stage.

Hassle’s task was to sing an improvised, 20-second, soul outro.

That day, Adis Adamsson, the manager of TEN Music Group, was in the audience, scouting for a new music talent.

“During those 20 seconds, my manager, who I have today, noticed me,” said Hassle.

Adamsson approached Hassle after the show, expressing his interest in him as a musician and invited him to meet the rest of his team, and so he did.

“In that way high school turned out to be a catalyst,” said Hassle.

Today, Hassle lives with Adamsson and his producer, Tommy Tysper, in a house in the Hollywood Hills. He describes them as an additional family
members of his.

Through their seven-year-cooperation, Hassle said they have a built up a strong bond.

“There have been ups and downs, but it has been an amazing journey,” he said. “And now we are here! It is crazy.”

Since Hassle was just out of high school when he signed, he was forced to adapt quickly to a musician’s rough reality and perform at high levels.

“It has been a stone-hard learning process,” he said. “Both in life and in the music business.”

In 2009, Hassle moved to London, where he lived for a year in order to reach a wider and larger audience.

He described London as a rough city, where he had to work hard and start over from scratch, touring around schools and playing his guitar.

At the same time, after his first album was released, a couple of his songs climbed the charts in Scandinavia and in one unexpected country in particular.

“In Denmark, it happened on its own,” he said. “My song, ‘Hurtful,’ got picked up through the radio and became a huge hit.”

He described this as a confusing time, with constant shifts from working his way from the bottom in England, to already being on the top in Denmark.

A while after his first record came out, Hassle said he felt a bit stuck. That is when TEN and especially Adamsson steered him in the right direction, toward greater businesses corporations and audiences in Los Angeles.

He has been working in the city for two years now and officially moved to Los Angeles about a year ago. He reasons that the move left him with more room to be inspired.

Today, Hassle writes songs on a daily basis, too many to be able to sing himself.

“I love the coincidence when a feeling reaches your brain from just playing a chord,” he said. “It is fun to write music that way, to improvise.”

About a year and a half ago, he started working with an instrumental track, adding the chorus and lyrics to it.

Today, that song is well known as “I Can’t Remember to Forget You,” performed by Shakira and featuring Rihanna.

When the song was finished, it ended up at the bank of songs at RCA Records, Hassle’s American record label, which also happened to be Shakira’s, and that is where she picked up the song.

He said a lot of other Swedish artists inspire him and that it is great that so many are making the move to Los Angeles.

“Now you just meet everyone here instead,” he said. “All the Swedes are here.”

The last couple of months Hassle has been doing a few guest-performances, featuring different artists’ music projects, and those are about to “pop up”  soon for the public to see.

He also has another EP coming up, which will be released within six months.

“There is lot of music awaiting,” he said. “What is so great here [in Los Angeles] is that I can afford to take the time to be inspired,” he said. “It is not like I am a journalist.”