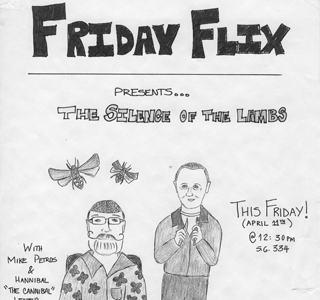 There is a certain magic about going to the movie theater, with the velvet seating and the scent of overly buttered popcorn offering a unique, but expensive, experience than just sitting at home and streaming a movie on Netflix.

Students and faculty are welcome to bring family and friends to watch and discuss the films.

Petros, a professor known for his characteristically unique waxed mustache, started Friday Flix five years ago and there have been 80 viewings since. A full-time professor since 1985, Petros started the idea when he picked up on a trend in his classes.

“I would show a really powerful scene and then I’d stop it and there would be groans and whines from students because they wanted to see the rest of it,” he said.

Petros chooses films that he described as “the best films you’ve never seen” and screens them each Friday in SG 334.

It is cozily filled with 20 or so deep turquoise-cushioned seats directed toward a projector screen that measures 14 feet diagonally. The room also features 5.1 surround sound.

“Before I show the film, I like to introduce the film’s unique circumstances and why I think it’s significant,” Petros said. “Then I like to get their reactions and see the issues that touched them or bothered them.”

At first, only half a dozen people attended, but as the years passed, Petros has seen an average of 13 to 15 people each Friday.

“Usually, my choices are something students haven’t seen. I like to start off the semester with an epic film like ‘Lawrence of Arabia’ or ‘Gone with the Wind,’” he said.

Petros chooses about 10 films for the entire semester and usually has them picked out two weeks before the semester begins.

Movies should be seen in “as close to the original form as possible,” said Petros.  “To me, that’s on a big screen in a communal environment with other people.”

Agnesa Kirakosian, 23, a film major and student in Petros’ media arts class, has been attending Friday Flix since the beginning of the semester.

“The reason I go is because he shows us the masterpieces,” Kirakosian said.

Larry Newberry, a mathematics professor and regular attendee, said that Friday Flix is a wonderful but “under-utilized opportunity on campus.”

Depending on their departments, full-time staff can earn flex credit for attending Friday Flix.

When choosing films for the semester, Petros finds it more difficult to eliminate which films to screen for Friday Flix.

“There are so many films and so little time,” he said.

Lyn Ribisi, a film major and student of Petros’ has been frequenting the weekly event for two semesters.

“You get to see movies you don’t normally see and discuss them rather than  staying home and watching a DVD,” Ribsi said.

Friday Flix is often themed in accordance to holidays, historic events and current events. One semester Petros featured only comedies.

For women’s history month, Petros will often select a film with a strong female lead. Likewise, for Black History Month, he selects a movie with a strong African-American lead.

“It’s important for film students to see movies in this setting,” Petros said. “They need to watch films critically.”

Petros explained the difference between viewing film on a laptop or other small screens  to viewing it in a theater-like venue.

“Imagine if you had an art history class,” he said.  “Seeing the art in your textbook is different from seeing it physically in a museum.”

Likewise, the theater “affects the film experience,” he said.

Friday’s movie will be “Singin’ in the Rain,” directed by  Gene Kelly and Stanley Donin.