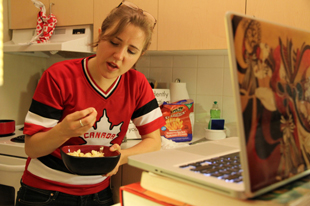 In her new cookbook, “My Drunk Kitchen: A Guide to Eating, Drinking, and Going With Your Gut,” released in August by Dey Street Books, YouTube star Hanna Hart’s personality shines through with her witty puns and winning attitude, as she offers readers not only fresh recipes but a fresh perspective on life.

“My Drunk Kitchen” includes recipes like Macaroni and Peace, Sloppy Jane and Naan of Your Business. Every recipe comes with a life lesson, an inspirational quote, and a suggested cocktail. For example, Naan of Your Business advises readers to be aware of their surroundings, because even though people just want to be themselves, others may try preventing that. In the end, however, it is “naan” of their business.

Hart began her YouTube channel to connect with a friend back in California while in New York. During her first broadcast, she enacted a fake cooking show and attempted to make grilled cheese while drinking. This show soon skyrocketed to success, with more than 3 million views on the first video alone.

Since then, Hart has created a worldwide travel video blog, complete with community service projects at local food banks; a comedy show; and has released the feature film “Camp Takota” with fellow YouTubers. She has even led discussions with President Obama about millennia. Through it all, however, Hart has kept on with her drunken kitchen antics, even cooking from fans’ kitchens while on tour.

Puns, Hart’s true specialty, are aplenty throughout the book, as she studs the recipes with puns as thoroughly as she does with seasoning.  They make this cookbook even more entertaining to read, as wordplay is used multiple times places. For example, the recipe for Pizza Pie Chart is actually for a pie chart that is made out of pizza.

In addition to recipes, Hart includes helpful tips like “10 Things Alcohol Does to Your Body,” informing her readers about the pros and cons of drinking. Hart lists different parts of the body, including the brain and kidneys, and explains the scientific effects of alcohol with a few jokes, such drinking can lead to a “sweaty tomato face.”

The forward by young adult author and YouTube star John Green perfectly encompasses the purpose of the book, as he tells a quirky story about the joys and sorrows of peanut butter and jelly sandwiches. He says that even a simple sandwich can taste different depending on the situation, which ties into the messages of “My Drunk Kitchen.” Through all of her recipes, Hart attempts to help her readers understand how to take personal problems and make the most out of them.

This book is not only funny but also thoughtful and entirely unique. Hart artfully weaves personal stories, such as her falling in love for the first time, with her recipes, entertaining the reader with every paragraph. She connects her recipes to life lessons. For example, she writes that sometimes it is okay to “embrace” compulsions and eat Frito Taquitos, for which she also provides a recipe.

Other life lessons include “Don’t tell yourself to quit before you ever get the chance to try. Never forget the importance of a CAN-DO attitude.” This accompanies her Can Bake recipe, which has the reader take a can of food, like chicken soup, and top it with anything they feel will complement it, even if it is a puff pastry. Hart shows that any combination is possible, just like anything in life is possible, through an open mind and positive thoughts.

Hart has the ability to laugh at herself and see the humor in mistakes and inconveniences, like wanting nachos but being out of tortilla chips. Sometimes, these mistakes lead to better creations, like Saltine Nachos. Just like Hart says in her introduction, “Ultimately, my goal is that by the end of reading this book you will have learned a thing or two about how to follow your heart. But first you’ll have to trust your gut.”

This cookbook may not be for everyone. Not all appreciate Hart’s slapstick, pun-filled humor, and Hart is liberal with profanity. Even so, it leaves the reader a bit more ready to take on the world. It is clear that she truly enjoyed creating this book, making it even more enjoyable to read. “My Drunk Kitchen: A Guide to Eating, Drinking, and Going with Your Gut” is available in bookstores everywhere for $22.99.

At 240 pages, Hart’s cookbook is a delightful read, with no one page any less entertaining or intriguing than the next.