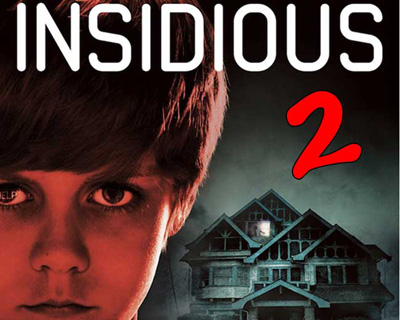 “Insidious: Chapter 2” is a rare example of a  sequel bettering its predecessor, which is seldom seen in the horror genre.

The film, directed by James Wan (“The Conjuring,” 2013) who also wrote the screenplay  revisits the Lambert family after father Josh, played by Patrick Wilson (“Watchmen”) rescued his son Dalton (Ty Simpkins) from a dark spirit world where he was held hostage by evil spirits seeking life in the human world.

Despite the return of Dalton, the Lambert family soon realizes that Josh is not the man they knew before he entered the spirit realm.

The film surpasses many others in the horror genre including the original film (“Insidious,” 2010)  by  skipping the usual gimmicks found in the beginning of the plot which rely on startling audiences more than actually scaring them and instead gets the audience right into the action. Josh’s wife Renai,  played by Rose Byrne (“Bridesmaids,” 2011) is the first to notice that Josh is not himself.

The story  begins with the usual doors opening on their own and pianos playing by themselves, but quickly escalates into a maddening sequence of disturbances.  Josh continually denies that anything is wrong and insists that Renai ignore the events that begin to torment her and the family.

This is Wilson’s second strong performance for James Wan after he played ghost hunter Ed Warren in “The Conjuring.” Wilson does a remarkable job in depicting the insanity and violence that the first film failed to capture.

The realization that Josh may not be who he seems causes Renai, and Josh’s mother Lorraine, played by Barbara Hershey (“Black Swan,” 2010) to investigate the events that occurred when Josh entered the spirit world. The character development of Josh is excellent as he slowly reveals the darkness within him after his encounter with the spirit world. He leads on the rest of the family who are unsure if the man they see is Josh or something else that returned in his form.

They seek the help of spirit guru Elise Rainier played by Lin Shaye (“Maniacs,”2001) to uncover a dark childhood secret that may explain what happened to Josh in the spirit world.

Excellent cinematography is a huge factor in terrifying the audience, which  will leave the theater with more than just goosebumps. The lighting and costume design during each  scene is a vital part of the film’s horror factor.

The film falls short in a few places, one being the attempted comic relief that sticks out like a sore thumb. Specs (Leigh Whannell) and Tucker (Angus Sampson) the assistants of Elise Rainier play essentially the same role as in the first film. They seem to only get in the way of any real progression in the film and find themselves getting hurt and humiliated in ridiculous gags that only take away from an otherwise excellent script.

There are a few strong moments in the film, including a murderous rampage through the family home that will remind the audience of Jack Nicholson’s performance in Stanley Kubrick’s  “The Shining.”

Another highlight is the solid acting by Simpkins, who proves that children are more than just helpless props in horror films. He comes through with a solid performance that goes head to head with any of the adult actors.

“Insidious Chapter 2” will not go down in history as a horror great, but it will be remembered for its unique take of otherworldly beings and the humans they torment.

The film is rated PG-13 for  intense sequences of terror and violence and runs for 105 minutes.