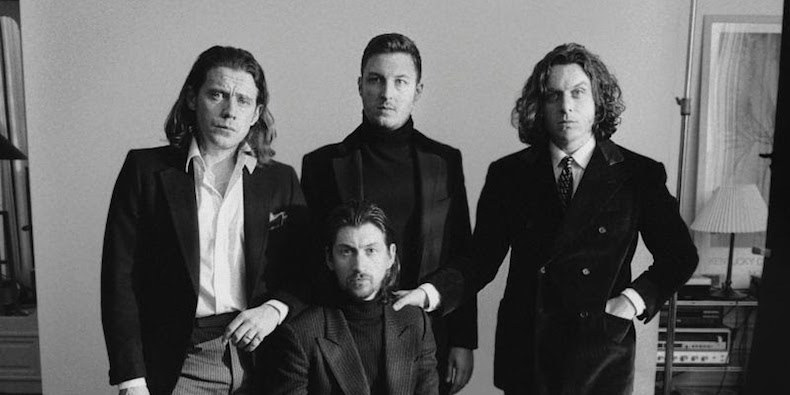 The band poses together in this courtesy photo.

“The moon has been colonized, gentrified, and turned into a luxury resort,” explained Pitchfork editor Ryan Dombal about the album’s concept. “Turner and his mates take up the role of the titular hotel’s house band.”

The album’s contemplative songs comment on contemporary topics like technology and consumerism, all from above the Earth’s atmosphere. The album’s eccentric conceptualization and sound are certainly a departure from the band’s usual, more traditional work.

Until now, their previous and supremely successful album “AM” was their most uncharacteristic, consisting mostly of heavy beats inspired by Dr. Dre but “sent flying across the desert on a Stratocaster,” as Turner described in a 2013 interview with NME magazine.

The albums before that, including their 2006 debut “Whatever People Say I am, That’s What I’m Not,” rely heavily on Matt Helders’ fast-paced drumming and have their rhythm established by guitar.

“Tranquility Base,” on the other hand, plays more like futuristic lounge music. There are no catchy choruses, blaring instrumentals or even hints of garage-enclosed days.

Instead, there are slowly dispensed layered melodies and vocal medleys, with Turner’s voice leading them surely and exquisitely. The 32-year-old Yorkshire native widens his vocal range and lands somewhere between his usual drawl and mesmerizing rekindled Bowie intonation.

Turner composed the entire album on a piano in his Los Angeles home, then shared and modified it with the remaining band members and their usual producer James Ford to more accurately encompass the album’s space theme.

Most songs feature an old, dream-pop vibe with jazz components. Turner claims the jazz infusion came from following “the places [his] fingers would naturally fall on the piano,” and resembled something his father used to play, according to an interview with Rolling Stone.

First track “Star Treatment” immediately asserts the album’s distinctive sound and opens with the brooding lyrics, “I just wanted to be one of The Strokes / Now look at the mess you made me make.”

The line acknowledges and yet denounces the fact that the Arctic Monkeys may very well have overpassed their American counterpart and early influencers. The Brit band immediately sold out their May show at the Hollywood Forever Cemetery and filled the Hollywood Bowl for this upcoming October.

“Star Treatment” reflects the passing time since the band’s start. Turner wanted to present “This feeling of, ‘Hang on, I was just there a minute ago. It seemed just now that I was wanting to be one of,’” he half-explained, before stopping abruptly, to the Los Angeles Times.

But Turner should hardly be surprised at his band’s success. They delivered four hard-hitting and infectiously enticing albums before experimenting with “AM,” and now they’ve demonstrated they’re as eclectically talented as they are popular.