Mural Mural on the Wall… 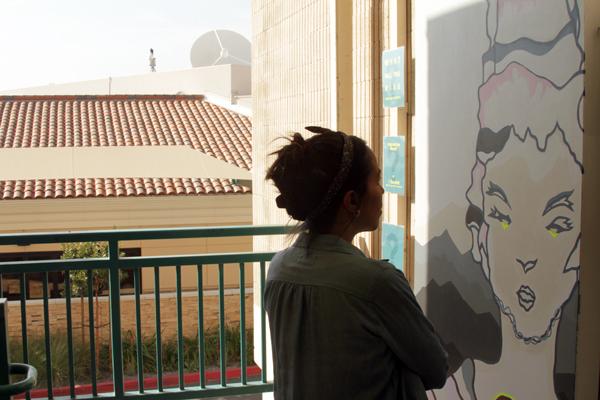 It was created over the winter session by student Jennifer Gurantz, who was chosen by GCC’s Studio Arts to present her mural on campus in the spring semester. The committee made its decisions based on the strength of the written proposal and the originality of the imagery. Then they donated paint.

To make her vision a reality, Gurantz dealt with the rain and the cold in what she called her effort to create a work of art to unite the student body.

“I was inspired by other artists and activists like those peacefully and boldly protesting at the North Dakota pipeline, and this is one of the ways I fight and join the dialogue,” said Gurantz

What makes this mural so interesting is that it’s interactive. Gurantz said she created the mural to bring everyone together and get us interactive with one another even if we have different backgrounds, opinions or views. Join the conversation on Instagram with the hashtag #whatwewillmissmost and take a selfie in front of the mural located by the Aviation arts center here on campus.

Gurantz has already gotten a couple of responses from the Glendale community. One student responds to the hashtag saying what she will miss the most when she’s gone is “the degree to which we understand our world and use that knowledge for the good.” Another student responds with, “I will miss having fun with the people we love, and defending this art, lol.”

“Art is a vehicle for dialogue. From dialogues we can hopefully come together even though we have opposing political views,” said Gurantz.

With the controversial election, protests worldwide and climate issues, people are expressing themselves by music, fashion and art, she said. This 8-foot-by-4-foot foot mural was created by Gurantz as a form of expressing herself.

“What would happen if humans disappeared?” she said. She posed the question and incorporated it into her mural asking, “What will we miss most when we are gone?”

The painting is of what she presumes the new human species would look like if humans continued to mistreat the planet. No water, no greenery, but just rocks. The climate is one of her main concerns.  The biggest things she would miss are “meals with her family, music, the smell of flowers and paint.”

Keep the interaction going and really think to yourself “What will you miss most, when you’re gone?”