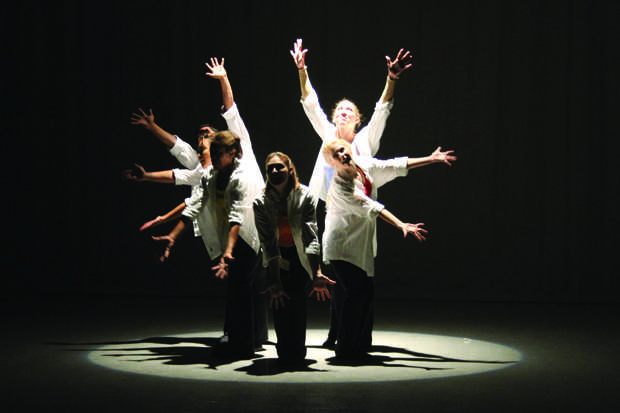 Tucked away in the Sierra Nevada building is a quaint venue where Glendale College students showcase their dance moves. The Dance Theatre has been home to countless performances and is the ideal setting for last week’s intimate hour-long variety show.

With direction from Dance Professor Dora Krannig and Emeritus Professor Lynn McMurrey, the group of 11 dancers and a dozen guest performers and choreographers put on an entertaining show.  All participants are students in dance production classes offered on campus.

Some dancers were young and others older, but there was no contrast in skills or abilities. While props played a key role in conveying the message of each dance, it was the group’s enthusiasm that kept the audience wanting more.

They were passionate and well-rehearsed.

Amrhein and guest performer Luis Montenegro were in full character for “The Lovecats.” The duo donned cheetah print and whiskers as they pranced around the stage.

Opposingly, “Non Sequitur” was a fun way confuse the audience, setting the routine apart from the rest of the show. In Latin, “non sequitur” is translated to “does not follow.” The term is defined as a conclusion or statement that does not logically follow the previous argument or statement.

The routine managed to reflect the lyrics in “Blue Skies for Everyone” by Bob Schneider. The dancers went from one end of the stage to the other, each wearing a colored tank top underneath their white button up — similar to a rainbow. Touris randomly appeared in a fairy-like dress several times, holding a trail of blue fabric above her head, and the group chased closely behind.

Suddenly, the dancers emerged with their own blue fabric and were eventually tied up in the “blue skies” as Touris celebrated her success. Confusing, I know.

Even the more somber dances, like “Bitter Earth” by Groom and “Pause” by Martinez, were captivating. While the costumes were a simple nude dress or an all black shirt-and-pant combination, it didn’t take away from the complex moves and emotion portrayed by members of The Company.

Brandi Mills’ set was fit with a bed, pillow and lighting that gave the illusion of vertical blinds. Her performance was all about the details. She threw bits of paper in sign of frustration and curled up on the bed in sorrow.

“Bitter” was choreographed by Ana Sanchez and consisted of elaborate jumps and twirls. Mills executed all of them with ease to Daughter’s “Youth.”

The two-part show went back and forth between pop, indie, folk and jazz. During such the brief time, they managed to incorporate classic hits and recent chart toppers including “Show Me How You Burlesque,” “Pillow Talk” and “Cannibal.”

Just when we thought it was over, Sinlapasai banged on the doors of the theater before being welcomed for a hilarious solo. She was dressed as a clown — giant red shoes and all — and shot silly string into the crowd while tripping over a bag full of gadgets and gizmos. The audience giggled as she kept up the antics to CeeLo Green’s upbeat hit “The Art of Noise.”

Eventually, she was pulled off the stage by a giant metal cane by one of the stagehands and the audience erupted in applause. The dancers returned to clean up the mess as the music played on and they took one last bow.

The college has hosted the annual dance production for 46 years.