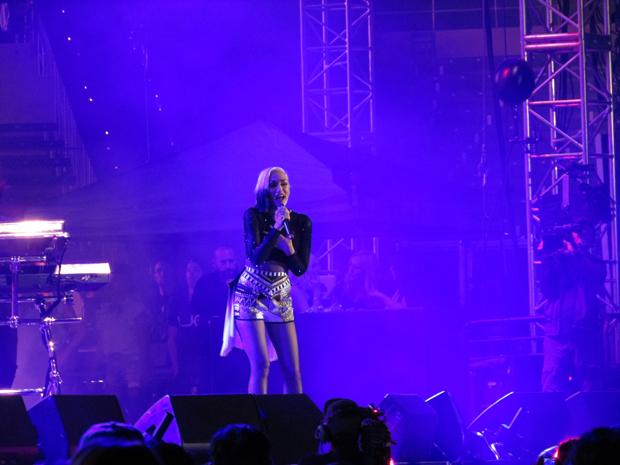 ONE-DAY FESTIVAL: Gwen Stefani captivates the crowd at the StubHub Center in Carson on Saturday.

KIIS FM hosted their 19th annual one-day music festival at StubHub Center in Carson on Saturday. With performances from Gwen Stefani and Mike Posner who after years of silence made their comeback and artists like Zayn and Kygo who released their debut album. They all took the stage at the sold-out Wango Tango.

Gwen Stefani’s last solo album was released 10 years ago, but during the night’s performance she showed that she was still no hollaback girl. Stefani sang a mix of old and new songs, including “Rich Girl,” “What You Waiting For” and “Make Me Like You” from her new album. The best song of the entire show was “Hollaback Girl.” From beginning to end, the whole crowd sang along with every breath they had. The last song of Stefani’s set was also a crowd pleaser and a sing-along as she performed “The Sweet Escape.”

Mike Posner performed his first single “Cooler Than Me” and told the crowd to go crazy and they followed his lead. Posner did a mashup of his hit songs before ending it with a stripped down version of his international hit “I Took A Pill In Ibiza.”

After leaving boy band One Direction a little over a year ago, Zayn Malik took the stage as a solo artist in all black attire. His set list contained both “She Don’t Love Me” and “It’s You” from his latest album “Mind Of Mine.”

Disappointment was in the air, however, when Malik left the stage without singing his first single “Pillowtalk.” The crowd and Malik’s fans were happy to finally hear his famous high notes during his last song for the night: “Like I Would.”
The dynamic duo, The Chainsmokers, filled their 20-minute set with a mix of their own singles and other remixes. During their Coldplay remix, Andrew Taggart told the crowd to take out their phones and turn on their flashlights to make the arena look like a sky full of stars.

They had the whole crowd jamming out to Red Hot Chili Peppers’ “Under The Bridge” before transitioning over to their own single “Roses.” When the crowd heard the words “my mama don’t like you and she likes everyone” they knew that they were in for a Justin Bieber remix of “Love Yourself” and screamed a little louder. For their new single and last song of their set, “Don’t Let Me Down,” Taggart told the crowd to not let him down and called in the singer Daya to sing her part of the song.

From one DJ to the next, the Norwegian DJ Kygo kicked off his set with one of his first remixes, “Sexual Healing” by Marvin Gaye. He went through a number of songs including “Firestone” and “Carry Me” from his new album “Cloud Nine” that was released on Friday. Kygo performed two songs with special guests, the first being Maty Noyes for the song “Stay.” For his last song he welcomed Parson James to the stage to sing “Stole The Show” as confetti covered the crowd.

DNCE, with frontman Joe Jonas, sang two of their four songs from their EP “SWAAY” before welcoming their special guest Hailee Steinfeld to sing a duet of “Rock Bottom.” Before ending their set, they had the whole crowd singing along to TLC’s ‘90s hit “No Scrubs” and during their own single “Cake By The Ocean” the band scattered through the crowd, running to different ends of the arena.

The girl power at Wango Tango also consisted of The X Factor group Fifth Harmony who sang and danced to their hits “Worth It,” “BO$$” and “Sledgehammer.” After singing their latest single “Write On Me” they left the stage, only to return moments later for an encore performance of “Work From Home.”

Grammy winner Meghan Trainor entered the stage in a pink glittery dress and sang hits like “Lips Are Movin” and “All About That Bass.” She performed her newest single “Me Too” then transitioned into her latest chart-topper “No” to close out her set.

Demi Lovato kicked off the show with her single “Confident,” wearing a golden dress to match her gold microphone. She did a set with a mix of six new and old songs and ended with “Cool For The Summer.”

Ariana Grande closed the show with her nine-song set list, starting with “Bang Bang” where she also rapped along to Nicki Minaj’s portion. Dancing in her high heels and furry coat, she sang old hits such as “Problem” and “Break Free” but also songs from her new album “Dangerous Woman.” This year’s Wango Tango ended on a high note after Grande performed “Dangerous Woman.”