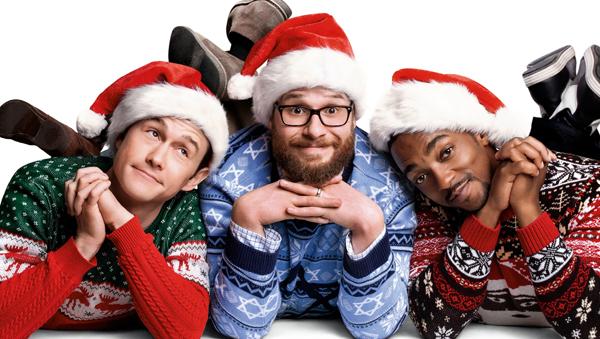 If movie goers are looking for a laugh this holiday season, Jonathan Levine’s “The Night Before” will be the right choice.

In the film, Seth Rogen flexes his party boy humor in a jubilant and mildly touchy story about how he (Isaac), Joseph Gordon Levitt (Ethan) and Anthony Mackie (Chris) pursue the hottest Christmas party of all time.

Isaac is basically the quintessential “Seth Rogen” role that the audience might recognize in films like “Knocked Up” and “Neighbors.” He is married to a pregnant Jillian Bell (Betsy) who shares plenty of quirky dialogue.

The film is a playset for Rogen to act like a drugged out, drunk version of himself all around New York City, which can fringe on tiresome at points, but definitely delivers on some laughs.

The real star of the movie is one of the finest young actors in Hollywood. Levitt is orphaned after a car crash killed his parents as a child, he’d spend Christmas with his two buddies and considers them family. Ever since college, they have been seeking the greatest Christmas party ever.

Levitt is charismatic and is able to dictate the mood of the scene whether he is getting smashed or trying to mend his relationship with ex-girlfriend, Betsy, played by Lizzie Caplan.

Mackie plays Chris, a professional football player who is surprisingly not popular at all and plays second fiddle to the bromance that Ethan and Isaac share. It is evident that the other two stars got the best lines.

The Rogen/Gordon-Levitt chemistry is there, but many of the sappy parts in “The Night Before” seem like watered down scenes from “50/50,” a classic friendship movie made by the same director, starring Rogen and Gordon-Levitt in 2011.

However, “50/50” centers around Gordon-Levitt cancer battle and Rogen is the endearing friend who tries to make things better. “The Night Before” doesn’t possess the necessary seriousness to make Rogen’s antics endearing. It has its touchy moments, including one with a hilarious weed dealer, played by Michael Shannon.
“The Night Before” was decent for a movie that takes place over one night; if you are familiar with Rogen’s work, but haven’t seen him in a while, it’s outright hilarious. Also, if you are even in the least bit a Joseph Gordon Levitt fan, you will enjoy his latest film.