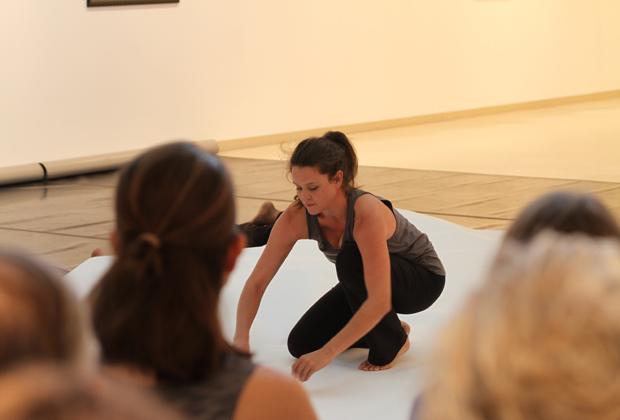 The Brand Associates Dance Series presented The Big Show Company’s dance-theater performance at the Brand Library and Art Center on Satruday.
Arianne MacBean, artistic director, founded the company in 1999. The dance-theater group consists of four members: Brad Culver, Max Eugene, Genevieve Carson and Angelina Attwell.
MacBean choreographed the performance which was based on stories of local veterans, dancers and audience members as part of The Collective Memory project.
The subjects are introduced through text and body movements.
Their mission is to create dance-theater performances that move the audience.
MacBean is a choreographer, educator and a writer. She is originally from Berkeley, but has lived in Los Angeles for about 20 years.
She always knew that she wanted to dance professionally. MacBean’s parents took her to her first dance class when she was 5 and she pursued it through her adult years.
Now she teaches different styles of dance: ballet, jazz, modern and contemporary, but her company performs dance-theater.
“My work is dance-theater, so it is movement and spoken word. I definitely have a passion for communication, linguistics and language,” MacBean said. “Not just the language of words, but also a language of the body and how we communicate physically.”
MacBean has two daughters and wants them to be passionate about whatever major they choose. She believes that anyone can be a good dancer if they work enough and advises young dancers to try different styles.
Eugene is a New York native, who is originally born in Haiti, but moved to America when he was 13.
He loves dance, theater, film and music. During his college years, he realized that dancing was his passion and started to attend dance classes. He has been a member of the dance-theater group for about five years.
‘’I cannot think of dance without thinking of theater, without making a film or music,” he said. “I never think of dance as something separate.’’
Eugene enjoys experimental work and thinks that while a dancer is recreating life, he or she is recreating art. His typical workweek consists of teaching and editing films that he is working on and rehearsing.
‘’This is where you come and live things that you left behind, want to relive again or forget,’’ he said. He said he is inspired by choreographer Pina Bausch and when he sees her work, he sees life. Eugene says he thinks that art, in general, is life.
Attwell, who is originally from New Mexico, has been in Los Angeles for about 15 years. She is a dancer, teacher and choreographer. She was 13 when she started to dance.
‘’Dance for me is the opportunity to be fully self-expressed, to find a way to say everything there is to say without words, to move with music, against music, to connect with others in the way that there is nothing quite else like it,’’ Attwell said.
Like Eugene, Attwell also looks to Pina Bausch for inspiration as well as Jiri Kylian and several local companies including the LA Contemporary Dance Company.
She has tried different styles of dance such as: jazz, modern, contemporary and hip-hop.
Attwell has been a part of the The Big Show Company for about five years and says: ‘’we are unique in that we mix dance, theater and performance art in a way that is personal, but also speaks to the human condition.’’
‘’They are all really strong artists and they have an amazing chemistry together on stage,’’ MacBean said.
The last performance of the series is at 2 p.m. on Oct. 31 by the Pony Box Dance Theater at the Brand Library and Art Center.
According to the series’ site, “(They) will present The Line, a dance for seven men that explores the phenomenon of conformity and the eternal tension between the demands of the collective and the needs of the individual in human relations.”
Performances are free and open the public with a reception that follows, giving the audience a chance to meet and mingle with the artists.