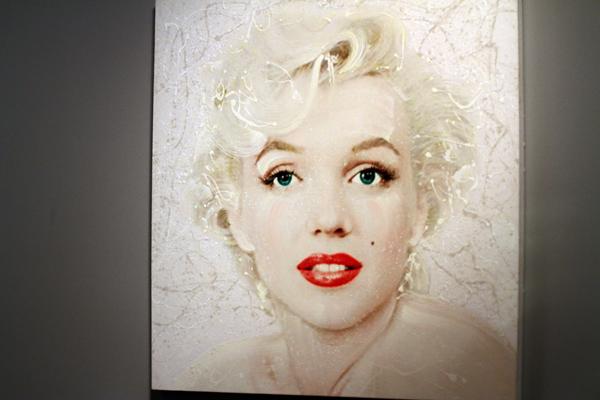 Many prominent women figures like Lucille Ball and Elsa from Frozen, to name a couple, are being celebrated for their impact on the world from past to present in “Leading Ladies: From Fantasy to Reality” at the Forest Lawn Museum in Glendale.

“The underlying theme here is the importance of the different things these women have accomplished in their life or given to our society,” said Joan Adan, director of Forest Lawn Museum and curator of the exhibition.

The exhibit beautifully illustrated the meaning of liberty and freedom for women to choose what they want to do and to strive for great accomplishments.

“He (referring to Willardson) makes the women come alive in front of you, there’s life in their eyes,” exhibit visitor Claudia Lechner said.

Pete Graziano, a GCC alumnus, has his 1995 Elizabeth Taylor portrait “Violet Eyes” on display. He used acrylic on canvas to perfectly capture her piercing violet eyes that pop in his colorful depiction of the Hollywood icon.

Graziano was inspired to create this piece during his time as Art Director at Fox News.

“When they did a story on Elizabeth Taylor, I drew this specific photo for a news graphic,” Graziano recalled. As time went on he eventually enlarged and painted it. Adan saw the painting hanging in his studio and requested to showcase it in the show.

“I miss it, but it’s in a nice place now,” Graziano said. “It’s nice to share this with others.”

The oil on canvas painting of Nefertiti, “Queen” by Dennis Lewis, shows his version of how he would imagine the face of the Egyptian queen. Finished just two weeks prior to the exhibit, Lewis felt he had to do something different since many would jump to draw Monroe or Taylor.

“Her name means beautiful woman coming and I tried to capture the beauty and regalness,” Lewis said. “I have always seen Nefertiti’s bust from a profile and I wondered what would she look like if we turned her around.”

Among the many paintings and busts, photographer George Rodriguez showcased his talent in a simple yet effective medium. His photo titled “Poder Chicana,” which translates to “Chicana power,” features Dolores Clara Fernández Huerta, a labor leader, civil rights activist and early member of the National Farmworkers Association — which later became the United Farm Workers.

The photo also captures Hilda Lucia Solis, an American politician and Eva Longoria, actress, producer, director, activist and businesswoman. The image was taken at the L.A. Plaza de Cultura y Artes as the women were awaiting the unveiling of a new statue.

“They were dedicating a monument for the day Mexican Americans were expatriated to Mexico even if they were born here,” Rodriguez said.

“Leading Ladies: From Fantasy to Reality” opens your eyes to what and how much women in time have accomplished for the future. The exhibit is open to the public Tuesdays through Sundays from 10 a.m. to 5 p.m. and it will run through March 27, 2016. Admission is free.