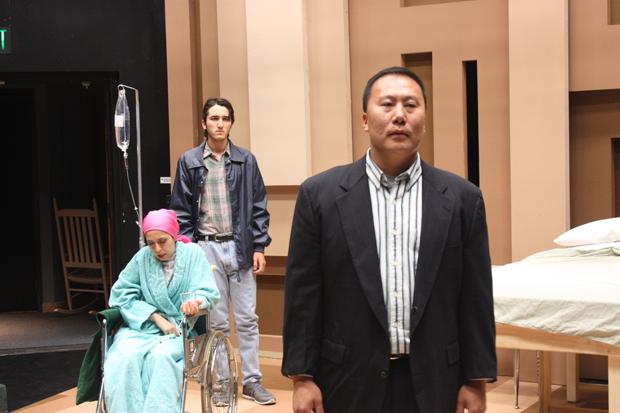 E.M Lewis’s “Infinite Black Suitcase,” a play offering a unique look at death, was put on by the college’s Theater Arts department, running from April 29 to  May 9.

The play tells the story of three families in rural Oregon and how they deal with death and the grief that follows it.

It comprises of fourteen short scenes and alternates between three families: a wife and her brother-in-laws dealing with the sudden suicide of her husband; a gay couple dealing with a deteriorating disease; and a mother dying of cancer who tries to get her ex-husband to accept joint custody of their children. It is not until the end of the play that the audience learns how these families are connected.

“It’s very heavy,” said Director Ed Douglas. “If you don’t feel something after watching this, there’s something wrong with you.”

However, Jeanette Farr said that although the play is full of grief and death, there is still humor and hope in Lewis’s writing.

After the May 7th performance, Lewis joined the cast and director for a post-play discussion to provide insight toward the play’s development.

“It’s great to be able to work with a playwright who is alive,” said Farr.

“Infinite Black Suitcase” is the first full-length play written by Lewis and draws heavily from her own experiences. Many of the locations in the play are places where she lived while in Oregon and the characters were based on people she knew.

“When you’re starting out as a writer, you can’t help but make it about yourself,” Lewis said.  “There’s a little bit of me in this play.”

She said that the actors “did a heck of a job.”

“It’s a gift for a playwright to come back and see their characters come to life again,” she said.

Lewis also explained the origin behind the play’s unconventional title. She was on a trip  to an art instillation with a friend when she saw the words “Infinite Black Suitcase” on the walls of a small, dark room.

“…I thought, ‘that’s the name…an infinite black suitcase could hold a lot of things.”