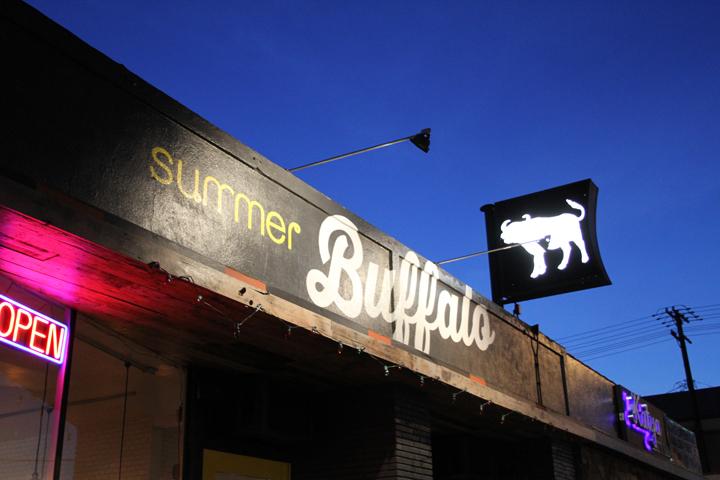 A quaint Thai restaurant resides on a small strip of Glenoaks in Burbank, offering its customers a modern take on Thai cuisine. Summer Buffalo opened late last year, taking the place of another Thai house and lighting up its entrance with a neon-lit buffalo above its door. What the name of restaurant symbolizes is unclear, but the reviews and cool atmosphere tempts customers to try it out.

The menu is rather small, but has a variety of dishes. This visit’s order consisted of Tom Kah, Garlic and Black Pepper Chicken Wings, Pad See Mau (Drunken Noodles) and Pad Thai.

The Tom Kah, a coconut milk-based soup, was flavorful and surprisingly light, however the choice of chicken in the soup, although a typical ingredient in Tom Kah, was questionable – shrimp or fish would have been a better substitute.

The order of chicken wings boasted a great amount of garlic and not enough pepper; it overpowered every other ingredient and left a pungent taste of garlic in the mouth. However, it was one of the more memorable dishes…or maybe it was just the lingering smell of garlic.

The last two orders of noodles were, again, flavorful, but not quite as good as they could have been. They seemed to be lacking the punch of flavor Thai cuisine is known for. It seemed as if the menu was trying too hard to be modern and hip, losing the authenticity of Thai cuisine in the process. While a few changes would be beneficial to a recipe, some things are best left alone.

The decor of the Summer Bufwas contemporary, with blue and gray arranged pillows and wooden tables. It was cozy and casual, but still held an air of sophistication – enough so that a number of guests were dressed in suits and business heels suitable for a Saturday lunch.

It is a fairly inexpensive restaurant, with prices ranging from $5 to $10 per dish. The waiters were attentive and caring, and did not hover by the table too often – a problem sometimes experienced at other establishments.

Overall, the Summer Buffalo is a promising restaurant and is a great place for first timers who may be hesitant to try Thai cuisine. The pleasant visit, combined with the restaurant’s future potential, will cause customers to come back time after time.