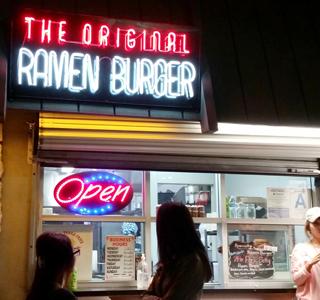 Located on Third and Vermont in Los Angeles, The Original Ramen Burger attracts customers with an enticing aroma.

On a Friday evening, as customers left the restaurant, raving about how delicious the Ramen Burger is, I found myself excited to try the delicacy despite my initial hesitation at the thought of ramen in the form of a burger.

Keizo Shimamoto, who created the Original Ramen Burger, always had a penchant for both ramen and burgers and so decided to fuse the dishes together. He opened the first Ramen Burger restaurant in New York, garnering a lot of success and leading to a second location in Los Angeles, which opened four months ago. He will further expand by opening a third location in Honolulu, Hawaii.

The Ramen Burger uses ramen as the bun rather than bread. It takes four hours to prep the craftily formed buns, as the texture has to be perfected to prevent them from falling apart. Next, a special shoyu glaze sauce, arugula and a beefsteak patty, created by Shimamoto himself, is prepared.

The first thing I tried was the Vegetarian Ramen Burger. The unconventional bun is soft and chewy, the taste complementing the sweet and sour patty that was spiced with shoyu sauce.

The Shaka Shaka Miso seaweed fries are the perfect side order to the vegetarian dish. Both crunchy and soft, they have a tangy aftertaste.

At the waiter’s recommendation, I concluded the meal with a cup of iced green tea before ordering the next dish. In fact, iced green tea is the only  drink available aside from water.

The Pork Belly Ramen Burger was just as tasty as its vegetarian counterpart.  It is made with Berkshire pork belly, arugula, onion marmalade and hoisin Karashi mustard. The patty was juicy and fused with different flavors, with the onion marmalade giving the burger a nice kick. The patty was well cooked, soft and chewy.

Although the idea of eating a burger with a ramen bun may sound repellent at first, Shimamoto’s unique creation is a must-try, as it offers both flavor and an opportunity to try something completely new.

Time Magazine even voted the Ramen Burger as the 17th most influential burger of all time.

“I made my dream come to life so everyone can try it,” Shimamoto said.

The hip atmosphere and friendly servers and cashiers, who help customers select their meals, further complement the restaurant’s delicious food.

The Original Ramen Burger is closed on Mondays but open 5 p.m. to midnight Tuesdays and Wednesdays and from midnight to 2 a.m. on Saturdays. On Sundays, it is open from midnight to noon. Although the schedule is confusing and reservations are not accepted, the experience is worth it.

Extra toppings such as cheese, crispy bacon and fried eggs cost up to $2.