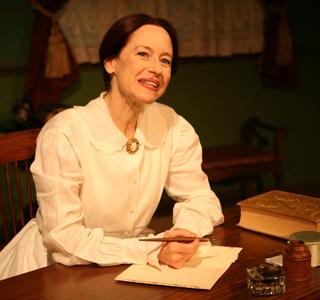 As she sat in the garden of 19th century poet Emily Dickinson in Amherst, Mass., actress Kate Randolph Burns felt herself getting into character while rehearsing lines for a play about the reclusive poet.

Dickinson will be visiting Glendale College in the person of Burns, who gives voice to Dickinson’s poems through a unique one-woman show. The play is at 12:45 p.m. in the auditorium and admission is free.

Besides Dickinson, the play involves 15 other characters interacting with the poet; however, the audience only hears Dickinson’s side of the conversation.

Written by William Luce and directed by Tony Sears, “The Belle of Amherst” is a two-hour play but has been cut to 45 minutes to fit into the school lunch hour.

Burns has been touring as Emily Dickinson since 2008. She first rented a theater in the NOHO district, where she won the Valley Theatre League’s Artistic Director Achievement Award for best lead actress and received rave reviews.

She began performing for schools after teachers would bring their classes to see her shows. At the request of English teacher Rita Hall, Burns performed at Cleveland High School in Reseda.

Colleen Path, a mass communications major at Glendale College, invited Burns to perform on campus after seeing her perform a few years ago.

“I was so moved and impressed [by the play],” said Path. “I really wanted it to get to a broader audience.”

For Burns, “The Belle of Amherst” is a way to honor Dickinson and her work.

“Not just to keep it alive but to awaken it,” she said.

According to emilydickinsonmuseum.org, nobody knows for sure if Dickinson wanted her work published. Throughout the poet’s life, only seven of her 2,000 poems received recognition. It was not until 1949, 63 years after her death, that her entire collection was published. During Burns’ performances, audiences get to experience a dozen of them.

Her poems do not have titles, but some of the chosen ones start by saying, “tell all the truth,” “I dwell in possibility,” and “there’s been a death in the opposite house.”

Dickinson’s modern thinking and her style of writing were outside the boundaries of the period she lived in.

“Her work was never taken seriously when she was living,” said Burns. “She was departing from what was considered to be great art at that time.”

Since Dickinson was known to have an introverted personality, Burns’ goal is to shed a new light on her poetry and express it in a way that Dickinson was not capable of.

Because Dickinson lived in a conservative and strict era, Burns said she has better conditions for expression and feels like she can “bring the freedom of an actor to the eccentricity of this character,” as Dickinson was far too introverted to express her poetry in public.

“What you are seeing on stage is her inner monologue,” she said.

Burns hopes for people to gain better insight into Dickinson’s poems when she recites them in the context of the life she was living.

Burns emphasizes the authenticity of Dickinson’s character and urges people to allow themselves to be inspired.

“Just give me 45 minutes of your life,” she said. “I will give you the world and your mind will be opened.You will be drawn into a different time period.”