‘Fury’ Depicts the Horror of WWII 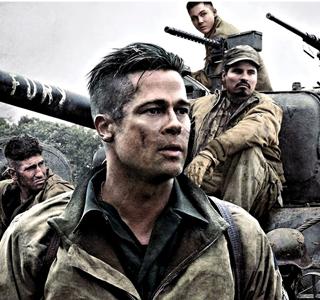 David Ayer’s “Fury” is raw, true, and deviates from the norm of films that glorify war; however, despite comparisons to “Saving Private Ryan” (1998), it falls short of the Academy Award-winning film.

“Fury” depicts the European Campaign in the later stages of World War II from the American forces viewpoint. Ayer, known for writing the blockbusters “Training Day” (2001) and “End of Watch” (2012), which he also directed, centers the war action drama around the five-man crew of an American WWII Sherman tank as they push into the heart of Germany on April, 1945.

Ayer successfully captured the WWII movie theme by challenging the picture of Americans as star-spangled liberators and portraying them for what they really are: desperate men trying to survive. However, despite this refreshing depiction, “Fury” still does not make the cut for top war movies.

Faced with the death of the crew’s assistant gunner who fought alongside them since the beginning of the United States involvement in the war, “Wardaddy” and his men question their survival and adjust to having an unwilling newcomer, Ellison, who has been in the army for only  eight weeks, replacing their late comrade.

Trained as a U.S. army typist, the crew deems Ellison an unfit replacement, lacking ample combat experience. When he accidently puts the Sherman tank in danger by letting his own morals interfere, Ellison is faced with hostility from the crew, as they doubt his ability to survive.

Divided between his conception of what is right and following orders, Learman portrays Ellison with unmatched skill, showing the desperation within a soldier that removes the concept of a glorified war.

“Fury” has many similar elements to “Saving Private Ryan,” including a small, strong, and well-selected crew that backs up the main character and a prime actor portraying the lead.

However, “Fury” lacks other elements, that keep it from rising to the level of “Saving Private Ryan.”

Pitt fails to reach Hanks’ high caliber performance in which he portrays a just and exemplary army captain. Pitt’s portrayal of a character who is meant to be a cold, battle-hardened staff sergeant struggling between keeping his men alive and following his conscience was sometimes seen as forced.

This may partly be due to the fact that Pitt’s supporting cast outshined him. LaBeouf, Bernthal and Lerman all perform at a career-defining level, leaving Pitt in their shadows despite the fact that his performance is above average.

“Fury” is filled with horrifying scenes. The allied troops encounter a road displayed with hanged young boys with signs around their necks. The Nazi SS did this as a punishment for their refusal to join the desperate German army.

Still, these scenes do not match Spielberg’s captivating portrayal of D-day and the Allies’ push into France, where he successfully depicts the desperate intensity of the Allies’ efforts to survive on the beaches of Normandy.

Another thing that sets the movies apart is that “Saving Private Ryan” has a clear goal, even stating it in the movie title. “Fury” lacks this, which makes the audience question where the plot is taking them.

Spielberg tends to glorify dying for one’s country, playing patriotic, dramatic scores when there are acts of heroism. Ayer does the opposite. In fact,  the movie’s entire soundtrack  is dark and ominous as viewers see the dismembered bodies of American soldiers being shoved away by a tractor on screen.

“Fury” sets a new standard among WWII movies by providing a realistic, less patriotic picture of the war. By providing an almost claustrophobic situation of desperation, Ayer depicts the true colors of war that is clouded behind propaganda, patriotism and glory.

LaBeouf’s character perfectly embodies the film’s theme with a single line: “Wait ‘till you see it… what a man can do to another man.”