Music Faculty Hits All the Right Notes at Recital 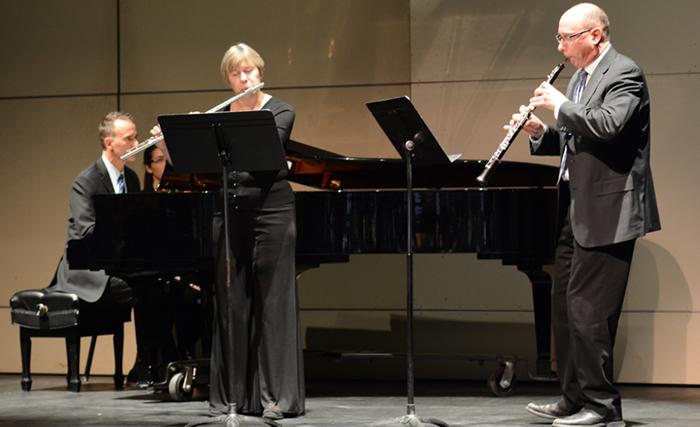 The Glendale College music department had a large turnout for a faculty recital held at the auditorium on May 1. The crowd was enthralled as performers mingled and interacted with audience members.

The introductory piece, “Trio Sonata in G major,” composed by Johann Sebastian Bach, was a good beginning despite being a bit ceremonial at times. The piece was performed by Bethany Pfluger, Paul Sherman and Peter Green.

The concert then picked up steam with Mozart’s “Sonata in D major Allegro,” performed by Patrick Rosalez, whose performance further energized the crowd. The performances on strings and on wind instruments by Pflueger and Sherman were sensational as they were the trendsetters of what was to be a wonderful concert.

The melodic voice of Marine Ter-Kazaryan captivated audiences with an arousing performance of “Tacea la Notte Placida,” a piece written by Guiseppe Verdi.

Matthew Plueger, a student and musician at GCC, who attended the event, was very excited about Ter-Kazaryan’s recital in particular.

“This performance was an extraordinary experience,” Plueger said. “The way she can sustain her vibrato — she captures you with her character. She simply captivates her audience.”

“Our performance showed a lot of variety,” said Green. “I just wish we could have let more people know about the show. However, I’m very happy with the performance. I had a lot of fun.”