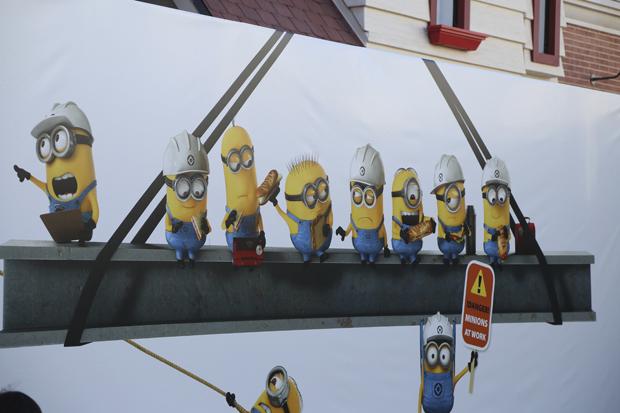 Sweltering heat and excruciatingly long lines are always the biggest downer of theme parks, particularly as one’s face trickles with sweat and the soles of people’s feet begin to blister from standing around so long.

While waiting for the gala opening of Despicable Me: Minion Mayhem, it seemed unlikely that the hype was worth the wait, particularly since a huge celebration was made for a ride that would only last a few minutes. Los Angeles Mayor Eric Garcetti, celebrity host Mario Lopez, vice chairman of NBC Universal Ronald Meyer and president of Universal Studios Hollywood Larry Kurzweil were all in attendance.

The opening started with a musical performance of Pharrell’s Oscar-nominated song “Happy,” followed by speeches from Garcetti, Meyer, and Kurzweil. To celebrate the new ride, guests were sprinkled with bright, yellow confetti that burst from giant balloons and fireworks that chalked the blue sky.

The attraction’s entrance is an exact replica of the character, Gru’s (Steve Carrel) home, a towering and dark mansion decorated with paintings. While in line, attendees are given 3-D glasses for the simulator ride. Subtle ups and downs made for a realistic joyride through a treacherous environment of experimental weapons and toxic chemicals.

The CGI screen and projection quality makes for a crystal-clear experience, particularly when Carrel’s booming, Eastern-European accent resounds through the lab where guests are taken for the actual ride, adding to the life-like quality of Universal Studios’ famous simulation rides.

The long wait was undeniably worth it, particularly as guests are entertained by Gru and his spastic-speaking minions on screen. The story line itself was heart-warming and clever, making the ride more than just a cliché amusement park attraction.

Gru informs everyone that they are being recruited into his minion army and will be transformed into minions themselves.

The ride stayed true to the Despicable Me films. Riders follow Margo, Edith, and Agnes on their hover car as they fly through Gru’s hazardous factory. The storyline centers on the anniversary of Gru’s adoption of the girls, with Agnes holding onto a present she made for her adoptive father, eventually causing her to fall from the hover car several times. Gru saves the day, surprising them with a theme park, Super Silly Fun Land, which children can actually enjoy at Universal Studios upon exiting the ride and Gru’s house.

Guests must be at least 102 centimeters tall to ride. Sorry, minions!