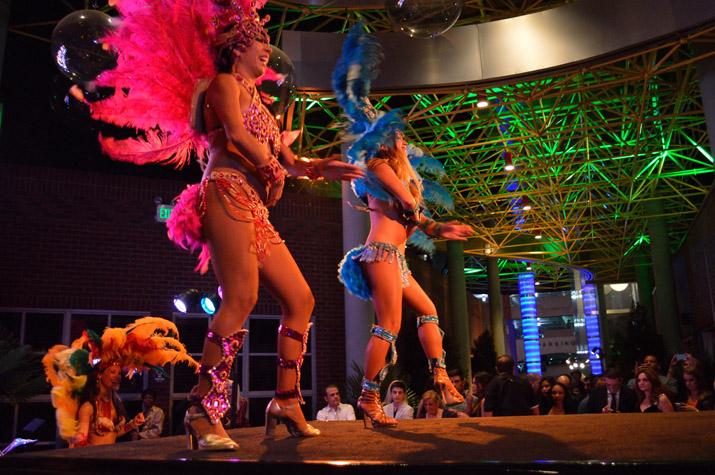 With the Americana, Bloomingdales, and the newly renovated Galleria lining the streets of Glendale, it is difficult not to notice that the city is developing into an increasingly metropolitan and urbanized area. MGN Five Star Cinema, which replaced the Mann 10 Theater complex on Maryland, is part of the city’s growth trend.

Walking into the venue on its grand opening night, one would come across a Charlie Chaplin impersonator smiling at passerby with his signature mustache and droopy eyes, a Marilyn Monroe look-alike catching guests’ eyes with the actress’s infamous sultry look, and a living statue of a golden Oscar.

Guests were entertained with an assortment of performers, including samba dancers, a live snake dance, as well as music and a live band.

Upon entering the theater, moviegoers might assume they have entered a hotel lobby. Upstairs, customers will find themselves in the Red Lounge, which includes a full service bar, just before entering the auditoriums. With leather reclining chairs and an indoor dining service, the theater provides an encounter with film different from the traditional cinematic experience. Considering audiences’ growing reliance on Blu-ray and wide-screen TVs, the change may be necessary in keeping cinema alive.

“There have been a lot of changes,” Voight said. “But we’re still sitting in a seat and watching a screen. It’s wonderful when people get together and go to the theater. It’s a different experience to laugh with 1,000 other people.”

Voight, impressed with the industry’s advancements in technology, including improvements in sound, as well as Five Star Cinema’s modern design, said the theater is “going to be a success.” The theater itself uses a state-of- the-art Dolby sound system.

Mayor Weaver says the theater will help the city’s economy and be a “great addition to the city.” Similar to the Americana, he says it will encourage non-residents of Glendale who visit the city to spend their sales tax dollars here, especially with shops like Bloomingdales in the vicinity.

James Ganiere, president of Rio Vista Universal, a television and film production company, said that Five Star Cinema is “a marriage between entertainment and food.”

Omar Miller (“Beastly,” 2011), also present at the opening, said the menu is much “better” since his first dining experience at the theater. He said that when you’re already paying close to $20 for a ticket, you want “practical food” like sandwiches as opposed to “salmon fillets,” though the theater’s restaurant, Frame 128, also offers gourmet dishes.

Though it was difficult to picture how an indoor dining service within a movie auditorium could work without disrupting moviegoers, Five Star Cinema’s waiters were in and out quickly and efficiently, their servince welcoming. The comfort of the plush seats also allows viewers to enjoy screenings without their legs getting cramped up, which can make up for any lackluster movie viewings.