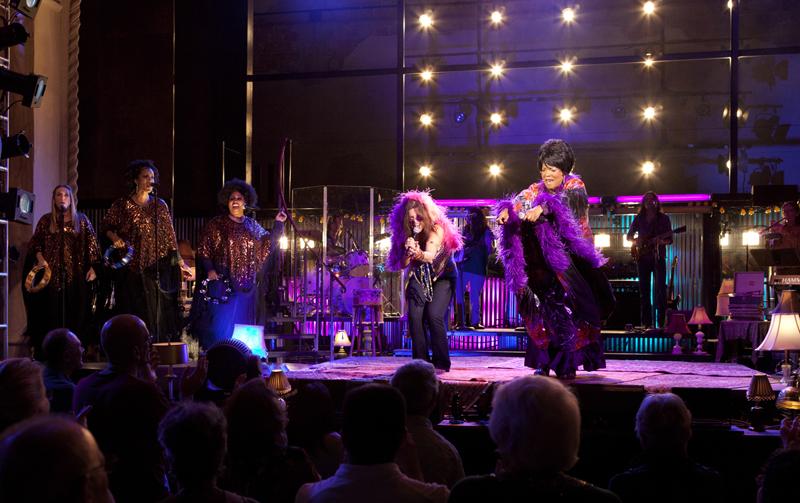 Janis Joplin, icon of blues rock, comes alive at the historic Pasadena Playhouse through April 21. Mary Bridget Davies delivers a flawless performance in the title role. Her voice is identical to Joplin’s and she mimics the singer’s style, intonation and body language perfectly. That said, her portrayal in no way overshadows that of her co-star, Sabrina Elayne Carten, who gives an electrifying performance as the Blues Singer.

The show starts with a bang as Davies launches into “Tell Mama.” The set design is clever, with a catwalk and dramatic staircase, and the lighting design adds to the mood with a rock-and-roll lightshow for the big numbers, dozens of table lamps for the interludes. The band is equally good for the rock anthems and the blues standards.

Nearly all of Joplin’s iconic numbers are represented from “Summertime” to “Down on Me;” “Me and Bobby McGee” to “Try.” Less well known numbers include “I’m Gonna Rock My Way to Heaven” and “Turtle Blues.” Thoroughly enjoyable is a cover of Bob Dylan’s “I Shall Be Released.”  Carten steals the show with Aretha Franklin’s “Spirit in the Dark,” but is equally effective with quieter numbers like Odetta’s “Down On Me,” and Nina Simone’s “Little Girl Blue.” Her range and versatility are breathtaking.

Any quibbles? Yes. The Janis Joplin narrative offered by playwright and director Randy Johnson comes across like a press release issued by her family; which, in fact, it is. Her life in Port Arthur was just fine, thanks very much, just not big enough to satisfy her ambition for fame and adulation. Men? Whatever. Considering that Joplin died of a heroin overdose, one might expect that her habitual, if not addictive, drug and alcohol use would be addressed. It’s barely alluded to. Her professional break with Big Brother and the Holding Company and formation of the Kozmic Blues Band is not mentioned at all. “The Rose,” the gritty 1979 film loosely based on Joplin’s life, it certainly isn’t.  “The Blues are a bad woman feeling good!” jokes Joplin, and these women have a lot to feel good about. The music speaks for itself.

Students (with a valid student ID) can purchase discount tickets to all 2012-13 subscription performances ($20 for plays/$25 for musicals), subject to availability. Tickets may be purchased at the Box Office up to one hour prior to the performance.

This is a must-see event that runs through April 21.