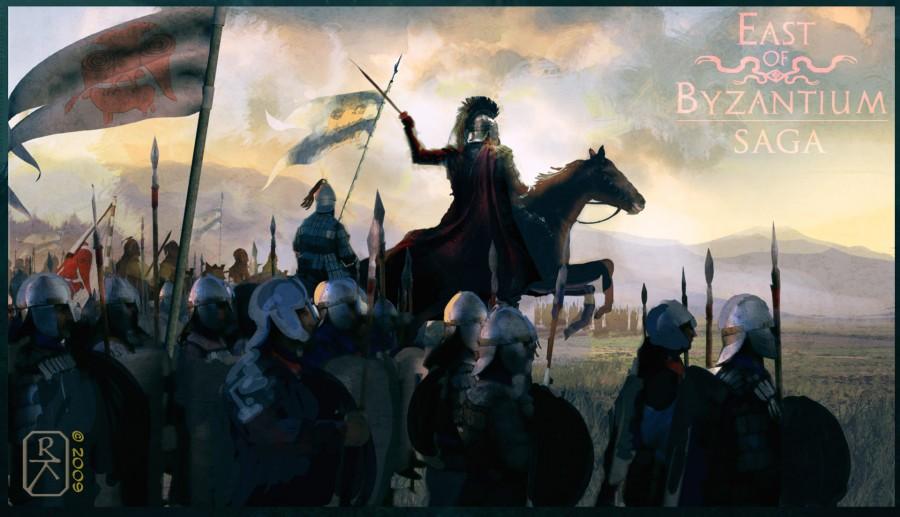 Roger Kupelian is the creator of some of the most iconic worlds in contemporary cinema, such as the “Lord of the Rings “trilogy, and he has constructed a new world in his latest endeavor, “East of Byzantium.”

With the job title of matte painter, it’s up to Kupelian to paint and digitally enhance the environments and backdrops of the movies he works on.

“East of Byzantium” is Kupelian’s recently published graphic novel series and he is looking to make it into not only a mini-documentary series, but into a major motion picture.

Kupelian promoted his latest project at the Glendale Central Library Auditorium on Thursday.

“East of Byzantium” spans 150 years of Armenian history starting at 301 A.D. when Armenia became the first Christian state in history.

“Persia and the Roman Empire were warring with one another and between this collision is Armenia,” said Kupelian. “Emperor Diocletian sent an exiled Armenian king back to claim Armenia as an ally of Rome. That changed that region of the world forever. It set a series of events in motion and altered not only the balance between empires, but the balance of religions and cultures.”

The story covers the aftermath of the Armenian king’s reinstatement and his people’s division by religious tension. Armenia’s monarchy is soon toppled by the Persian army and the remnants of wealthy noble families become rivals. The warring nobility’s allegiance is deeply rooted in its pagan (Persian) or Christian (Roman) heritage.

The constant bloodshed leads into the year 451 A.D. and Kupelian’s interpretation of St. Vartan Mamigonian, the most venerated saint in the Armenian Orthodox Church.

Kupelian painted his first image of Vartan in New Zealand, on the set of “Lord of the Rings.”

Working on “Lord of the Rings” sparked Kupelian’s desire to write the screenplay for “East of Byzantium” that also prompted the graphic novel, but his foundation and passion for this story delves deep into his childhood.

Growing up in Sierra Leone, Africa, Kupelian was apart of the minority, being one of the very few African-Armenian kids in the region.

“You realize when I was growing up that I was a part of the United Nations. Out of a mixed group I was the Armenian kid in Africa,” said Kupelian. “That is where my sense of identity came from. My parents made sure that I understood our history, mythology and culture. I knew where I came from.”

During his childhood, Armenia was under the control of Soviet Russia.

When Kupelian was two and a half years old, his father took him to the harbor in Freetown, Sierra Leone, where there was a Soviet ship docking named Armenia.

“The ship was being sent around for propaganda purposes,” said Kupelian, “so, of course with a ship called Armenia there were soldiers from Soviet-Armenia.”

The Soviet-Armenians were exiting the ship when Kupelian was perched on his dad’s shoulders. His dad told him, “these are Armenians.”

In response the young Kupelian recited in Armenian, “I am armenian, I am son of Vartan, fear me.”

The small chant is a loose translation of a traditional Armenian poem about St. Vartan.

Kupelian recalls the power of his words, “There wasn’t a dry eye getting off that boat. These people were oppressed and nationalism wasn’t allowed. They didn’t expect to hear something so free and patriotic from some kid in Africa and we all grew up with that poem.”

This experience has heavily impacted his love for his culture and people. He also derives inspiration from his culture through learning about the Armenian Genocide. Armenian culture has evolved over the years, according to Kupelian. Armenians have gone from proud warriors to helpless victims.

“A culture that is thousands and thousands of years old, one hundred years ago had to endure almost complete annihilation,” said Kupelian. “So we learned about the genocide in 1915.”

He was a nationalist stuck between two conflicting emotions that are a part of a culture that, seems to him, is always struggling.

Armenia was struggling again in 1998 when the Nagorno-Karabakh War started and Kupelian set out to film it. “Dark Forest in the Mountains” was Kupelian’s first documentary, and the first time he directed a movie. He started filming the war in the 1990s.

Avedis Sangigian is an Armenian-American veteran from the Nagorno-Karabakh War who attended Kupelian’s lecture. Sangigian fought for a year and a half and was one of many Armenian Americans that volunteered to fight.

Garo Kyahkidjian was a friend of Sangigian and is a main character in Kupelian’s documenatry. Kyahkidjian died after the war.

“I watch that documentary everyday,” said Sangigian, in memory of his old friend.

Sangigian and Kyahkidjian’s bravery makes them warriors, according to Kupelian.

“I want our next generation to see itself in terms of being a warrior,” said Kupelian. “We must once again embrace and embody what it means to be a warrior tribe.”