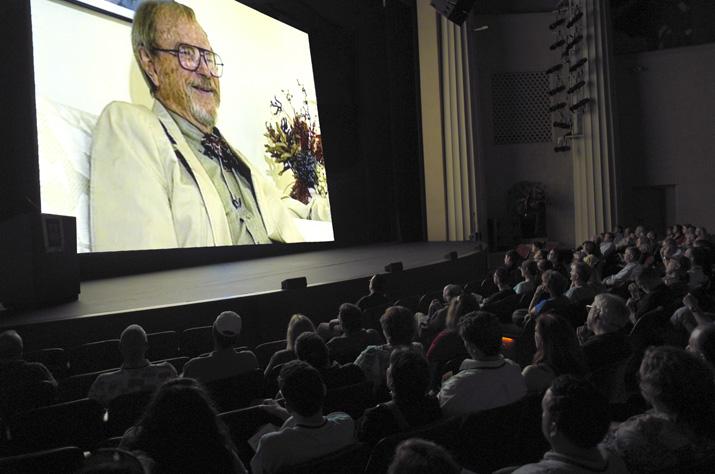 The 100th anniversary of Chuck Jones’ birth was celebrated at the Alex Theatre on Sept. 21, uniting people of all ages for the Chuck Jones Centennial Film Festival.

The event began with a reception and a buffet. In the theater’s foyer, animators such as Eric Goldberg, (“The Princess and the Frog,” 2009) Carl Bell (“Tarzan,” 1999) and animation producer/historian Jerry Beck mingled with guests and the Jones family.

Craig Kausen, Jones’ grandson, said that he fell in love with the Alex Theatre instantly when he was in the process of choosing a venue for the celebration. He promised the audience a great time and was able to keep that promise as the event contained plenty of laughs and touching memories of Jones.

The first short was the classic, “Bully for Bugs,” (1952) which left the audience in a state of euphoria. The audience erupted with applause when Jones’ name appeared on the big screen.

Family members, colleagues, and friends told their fondest memories and stories of Jones on stage while some of the beloved cartoons from Chuck Jones’ personal vault were displayed on the screen: “The Dot and the Line” (1965), “Robin Hood Daffy” (1958) as well as “Ready, Set ,Zoom” (1955).

Mariam Jones told a story about the time her late husband once taught a class. A student complained that she could not draw a straight line.

He replied, “that’s fine, the crooked line is more fun.”

Mariam said that finding the positive side in everything as well as the ability to make people laugh were the two precious gifts that Jones had. He turned his own life and the lives of the people around him into a fairy tale.

With a career that lasted 58 years, Jones directed more than 300 shorts. In an official list of the 50 greatest cartoons voted by 1,000 animation industry professionals, 10 of those were directed by Jones.

Jones’ work was nominated for an Oscar eight times during the span of his career. He won three awards for “So Much For So Little“ (1949), “For Scenti-Mental Reasons” (1949), and for “The Dot and The Line: A Romance in Lower Mathematics” (1965). These award-winning works were played at the Alex Theatre, with “For Scenti-Mental Reasons” finishing up the night with a round of applause.

After the show Valerie Kausen, Jones’ granddaughter; Carl Bell, who worked with Jones on “Tom and Jerry”; and Jerry Beck, former Academy of Motion Picture Arts and Sciences governor took to the stage to reminisce about Jones.

Also present was June Foray, who voiced several of Jones’ characters such as Rocky Squirrel, Lucifer, Cindy Loo Who, Witch Hazel and others.

Disney film director Eric Goldberg said that he became a fan of Jones in his teen years. He noticed that Jones’ cartoons were “funnier than others” and were drawn better, but didn’t have his name. Wondering who the cartoons’ author was, he ran into Jones, who signed Goldberg’s copy of “Tom and Jerry.” Inspired by Jones, Goldberg started his animation career and since 1990 has been working with Jones.

Jones’ only daughter, Linda Jones, gave a remarkable, funny, speech about her father. She said he was a real Renaissance man who knew everything and was able to do everything – he was incredibly talented in many aspects.

“After 25 years of working for animation industry he discovered that didn’t have talent for drawing,” said Linda. “But he could not quit because he drew too well.”

One of her memories of Jones was what he said to her when she was impatient — “your time will come.” Growing up, Linda said that her father believed that “the only thing you can give a child is time,” a saying that he internalized through his life.

At the end, the Jones’ grandson Craig Kausen led the audience in a vow to meet in the same place in 100 years to celebrate the 200th anniversary.