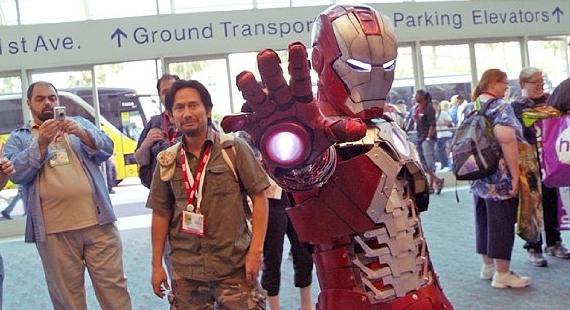 KEEPING IT UNREAL: “Comic-Con Episdoe IV: A Fan’s Hope,” offers a surreal look at the lives of fans.

Within the past couple of years, Comic-Con has become the hub of the entertainment industry for one weekend in July. However, for more than 40 years, it’s been the meeting place for fans of comics, allowing them to browse and buy their highly sought-after items.

In his newest documentary, “Comic-Con Episode IV: A Fan’s Hope,” Morgan Spurlock (“Super Size Me,” 2004), dissects the Con, tracing its evolution since its first years in San Diego.

Filmed at the 2010 convention, “A Fan’s Hope” follows a variety of different people traveling to the convention, including the designer (Holly Conrad) and the collector (Anthony Calderon), among others. Some are more prevalent in the movie than others, and it’s an excellent decision by Spurlock to focus only on some of these people for a short amount of time. If dragged out any longer, chances are some of their stories would become stale and uninteresting, leaving the audience wanting more of another subject.

While people who aren’t aware of the impact that Con has on the entertainment industry or the fans who attend it, there will be many positives that they can get out of this documentary. Included in this are the heartwarming stories that Spurlock intertwines in the film, as well as the heart-wrenching ones.

There are six groups of people that Spurlock follows in the film. Among the six are Chuck Rozanski, an older comic book dealer, as well as the owner of Mile High Comics. While not necessarily as compelling as some of the other people in the movie, it’s an interesting perspective to hear his thoughts on how the Con has evolved over the years.

He also brings up one of the major points made in the movie. While it’s mostly a celebration of the convention itself, there’s that underlying sense that a few of the people being interviewed aren’t happy about the way the convention has changed.

In their eyes this is mostly due to the fact that it has been invaded by Hollywood. They believe that the Con seems to be moving entirely away from the groundwork that it was based on – comics.

Arguably the most interesting of the subjects that Spurlock follows is Conrad and her friends, a group of cosplayers (costume play) competing in the annual masquerade that takes place at the Con.

The audience gets to see the group putting some finishing touches on their work for that year, multiple costumes based on BioWare’s brilliant video game “Mass Effect 2” (2010).

Also highlighted are aspiring comic book artists Skip Harvey and Eric Henson. Spurlock does something in “A Fan’s Hope” that is able to do something that many documentaries strive for, but don’t necessarily succeed in doing, and that is in drumming up a real sense of drama when the two set out for portfolio reviews from a couple major comic book publishers. He does this again when focusing on toy collector Calderon, who’s out to obtain a 19-inch Galactus figure.

Spurlock also presents a nice contrast with that dramatic tone by offering a bit of genuine comic relief that never feels forced. He does this in the form of a young couple who met at Comic-Con the year before, James Darling and Se Young Kang.

Spurlock focuses on Darling’s attempt to propose to Kang at Kevin Smith’s Panel. Hilarity ensues when he tries to get away from her for a moment so he can obtain the ring.

Rather than interject with his own comments, Spurlock never feels the need to interfere, unlike his other films, such as “Super Size Me.” He’s never present in the film, but instead he focuses on all of these people who have been going to the Con for years and letting them speak freely about the things that they love about the event.

“A Fan’s Hope” boasts a cast of interviewees that will make any nerd ecstatic. As a fellow geek, seeing the likes of directors such as Kevin Smith (“Red State,” 2011), Joss Whedon (“Firefly,” 2002), and Guillermo del Toro (“Pan’s Labyrinth,” 2006) talk about the Con in such a candid way is a joy.

Something that can often hurt documentaries is that they can feel too preachy. “A Fan’s Hope,” never exudes that sense of entitlement.

Spurlock does an excellent job of offering a perspective of the Con to viewers who might only see it based on coverage from TV shows like “Attack of the Show” or the Internet. By following people who are truly invested in it, Spurlock ultimately makes it even more compelling than it might have been.