‘Rock of Ages’ Enjoys Limited Run at the Pantages 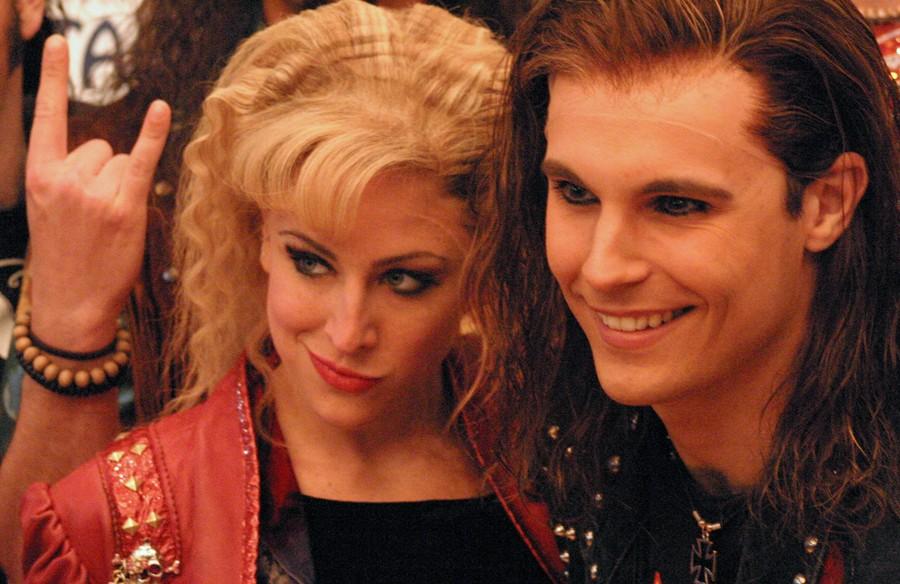 Nostalgia for simpler times and days past is common enough in our fast-paced world and although time travel isn’t possible, “Rock of Ages” provides a raunchy, rockin’, rowdy romp through love and social change in late 1980’s Los Angeles.

“Rock of Ages” follows Sherrie (Shannon Mullen) and Drew (Dominique Scott) as they pursue their dreams in the Bourbon Room, a bar on the Sunset Strip that’s seen better days. They “meet cute;” a stumbling janitor/rocker and an aspiring actress bumping into each other and falling in love.
Slideshow Media Credit: Jane Pojawa

While the romance takes off (or rather stalls and spurts), a fiendish German real estate developer, Hertz (Philip Peterson) and his son Franz (Stephen Michael Kane), approach the mayor with a plan to turn the Sunset Strip into a shopping complex exuding European elegance and efficiency. Fighting the oncoming change is Regina (Katie Postotnik), ex-secretary of the mayor and rock enthusiast. And that’s Regina as in vag – you can figure it out.

Facing “economic redevelopment” at the hands of Hertz, the Bourbon Room’s owner, Dennis (Matt Ban), and his right-hand man and story narrator Lonny (Justin Columbo), call upon legendary rock star Stacee Jaxx (Matt Nolan) to play one last show at the place that gave birth to Jaxx’s legendary band Arsenal – the Bourbon Room itself. The show fails to prevent the Bourbon Room from falling prey to Hertz, and is closed down (along with the rest of the Sunset Strip) to make way for Hertz’s vision.

Drew’s lack of sophistication when it comes to women, leads him to accidentally “friendzone” Sherrie, a mistake that he regrets as Sherrie is caught up in a whirlwind romance with Jaxx – a romance that leads both her and Drew on a downward spiral and on separate paths.

The main allure of “Rock of Ages” is the music. Rock hits from the ‘80s including Styx’s “Renegade,” Journey’s “Anyway You Want It,” and Europe’s “The Final Countdown” are intertwined into the story and form an integral part of the performance. The main nostalgia factor in “Rock of Ages” comes from hearing familiar songs portrayed in a faithful adaptation to the original piece. Thirty-two songs are covered throughout the performance.

“Rock of Ages” isn’t afraid to titillate the audience, and there’s plenty of arousal to go around. The audience is treated to lots of eye candy on both sides of the spectrum – strippers and streaking rockers are unabashedly strewn throughout the performance, but with humor and good-natured charm. Creative innuendos come as naturally as breathing and offer fantastic comic relief to the audience.

“Rock of Ages” constantly breaks the fourth wall through the help of Lonnie, who addresses the audience and characters as an observer. In one scene, he pulls Drew aside and chides him for missing his chance with Sherrie despite having been given the perfect opportunity to develop a relationship (after telling him that he’s an actor in a play and showing him the playbill).

The stage gives the performance a gritty, 80’s bar feel without the actual grit and litter – a barstool, stripper billboards, gold records, guitars (both electric and acoustic) smut posters and a live band capture the essence of the moment. An LCD backdrop changes depending on the scene – flames, an Amtrak train, a starry sky and more appear as the story progresses. Smoke machines and strobe lights help recreate the atmosphere of a rock concert, bringing the audience into the performance. There was an audience member who pulled out a lighter and held it high, and others who did the same with cell phones.

Although the story lacks much depth, it doesn’t lack heart. Love, rejection, broken dreams and the end of an era all fall together in a satisfying conclusion to what seems as an impossibly hopeless series of situations.

As for Drew and Sherrie, they finally get together. Where do they end up? Glendale.

“Rock of Ages” runs through March 25.