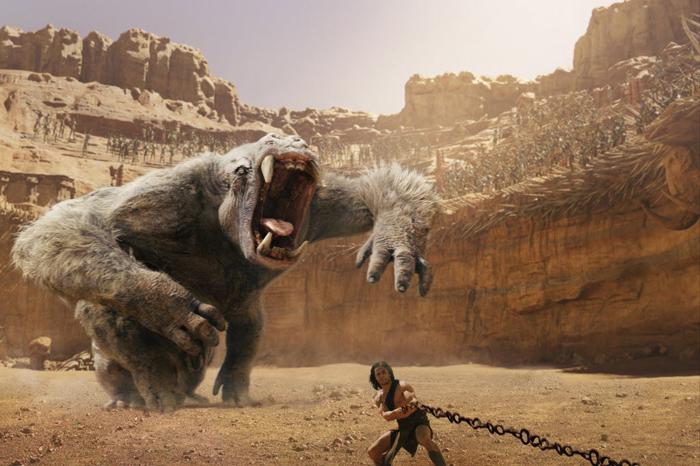 For decades Disney has always been considered a staple in filmmaking. Its influence on animation is unmatched, yet the same can’t always be said for its live action output in recent years.

While films like “The Muppets” can relate to many viewers based on recollections of their youth, something like “John Carter” doesn’t necessarily garner that same response.

“John Carter” is centered around a Civil War veteran (Taylor Kitsch “X-Men Origins: Wolverine,” (2009) who gets transported from 19th century Arizona to Mars. There he encounters aliens and a princess (Lynn Collins “The Lake House,” (2006) who ends up in need of a protector.

The “fish out of water” story has been done numerous times, and its lasting appeal can only be stretched so far. While “John Carter” sustains this for a good amount of time, its novelty begins to wear thin by the halfway point.

Kitsch’s portrayal of the title character is respectable and he has just that right amount of cockiness and likability that Harrison Ford had in the “Star Wars” and “Indiana Jones” films.

Directed by Andrew Stanton (“WALL·E”, 2008), “John Carter” is the second live-action film in the past year to be helmed by a Pixar veteran.

Brad Bird did a excellent job of directing these massive action set pieces in “Mission: Impossible — Ghost Protocol” (2011) and he perfectly utilized the technology that filming for IMAX and on 70mm film has to offer. As for “John Carter,” the technology it tries to use includes 3-D, which ends up being rather useless and is just another example of bad post conversion.

Bird also directed the critically-acclaimed Pixar film “The Incredibles.” However, fans of film and everything that it has to offer often cite “WALL·E” as not only the best, but one of the greatest animation films ever made. “John Carter” isn’t able to elicit that same response of wonderment and it just feels like a retread of many other movies.

What really makes “John Carter” confusing is that it attempts to dip its toes into too many genres. At times it feels like it’s channeling a western as well as a period piece, then it takes on sci-fi while also playing as an action film, drama, romance and comedy. It never gets its footing as one specific type of picture, which ultimately hurts the film.

In late 2009 James Cameron’s “Avatar” wowed audiences with its spectacular use of 3-D. Disney did this right in 2010 when it released “TRON: Legacy” (2010), which not only featured some of the best 3-D in recent years, but boasted one of the best scores, sound design and sound editing in a long time. When a film ends up being put through 3-D post conversion, it doesn’t evoke that same feeling one gets when watching a film actually shot with it.

One of the things “John Carter” gets right is that the action set pieces are exciting to watch. However, pacing actually ends up hurting the action scenes, as by the time the big white ape action scene takes place it feels like the movie should almost be over. However, throughout that battle there’s a sense that there has to be more after it to finish the film.

The best part of “John Carter” is the ending, because it wraps up the entire story in a nice fashion by explaining everything in a concise and coherent way.

Rarely does a huge action blockbuster enlist unknown actors to lead their cast, yet with “John Carter” the movie does just that. While stars like Willem Dafoe and Thomas Haden Church are present, they voice aliens in the film and they’re nearly unrecognizable. The only actors that most people will recognize are Bryan Cranston (“Breaking Bad”) (2008) , who ends up being more of a cameo, and Mark Strong (“Tinker Tailor Soldier Spy,” 2011). It’s not necessarily a bad thing, but just a stray observation that ends up seeming quite unusual, especially for a film of this scope.

Chances are that fans of television right now or anything that J.J. Abrams puts out on TV will enjoy the music for “John Carter” and recognize it right away. Composer Michael Giacchino, who scored “Lost,” “Fringe” and “Alcatraz,” does nice work here. More so than any of his work on “Fringe” and “Alcatraz,” his score for “John Carter” is very reminiscent of the finale for “Lost,” particularly one piece, “Deja’s Theme,” and that’s in no way a complaint.

While the visuals and overall look of Mars is appealing, it often times doesn’t seem different than the scenes that take place in Arizona early on in the picture. Even something like Ridley Scott’s seminal sci-fi classic “Blade Runner” felt more otherworldly than “John Carter,” and that film took place in a futuristic Los Angeles. To refer back to “TRON: Legacy,” the same can actually be said for that as it is with “Blade Runner,” as those sets were a joy to look at.

There is potential in “John Carter” but it’s not fully realized. Its action scenes will meet the needs of some but those looking for something more will be disappointed. While its young cast does a nice job with what it’s given, the end result just isn’t that good.