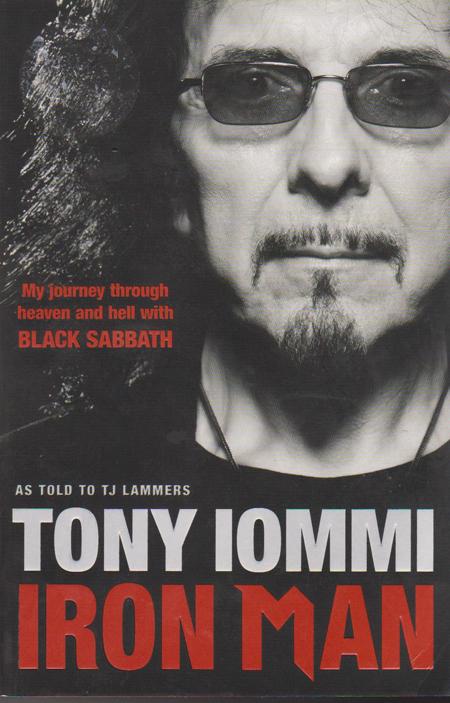 Legendary Black Sabbath guitarist Tony Iommi chronicles his life and history of the band in his memoir “Iron Man: My Journey through Heaven and Hell with Black Sabbath,” covering every cornerstone of the band’s illustrious 40-year career.

As the only member who has been a part of every one of Black Sabbath’s 18 studio albums, Iommi is the best source when it comes to recounting the journey through all the joyful ecstasy, evil women, sabotage and paranoia that has surrounded the band on its hard road to success.

The 370-page hardback begins in Iommi’s hometown of Birmingham, England, in the late 1940s. Iommi was so poor his parents couldn’t afford to buy him a school uniform. Since there was not much else to do in a town still recovering from the effects of World War II, Iommi stayed home and practiced playing his guitar. Later in his late teens, he worked at a factory to support his family.

On the last day on the job at the factory, before joining Jethro Tull on a European tour as a guitarist, Iommi accidentally sliced off the tips of his middle and ring fingers while cutting sheet metal. As a reflex, he pulled his hand back and the tips of fingers were cut off.

Iommi recounts the thoughts he had and the images he saw vividly. He said he saw the bones sticking out and blood was everywhere. Afterward, he created homemade fingertips from melted plastic and leather from his jacket so that he could play — a form of prosthetic he still uses today.

Because playing guitar hurt his fingers, he detuned his guitar and used light-gauge strings to ease the tension. This created a dark, sinister sound. This new sound coupled with lyrical themes about drugs, sorcery, religion, depression, death, heaven and hell resulted in the creation of heavy metal.

The book goes into just enough detail on the topics it covers. Most chapters are anecdotes that are only a few pages long. With 90 chapters, Iommi covers the recording of every album and each tour, clearing up the mystery behind how things were handled.

It goes from the early ’70s when the band was enjoying the thrill of it all and trying to breakout, to the mid ’80s when the band was slipping away from fame and feeling trashed and lost forever, to hearing the call of the wind and feeling born again in the mid-’00s when the members of the “Heaven and Hell” album reunited with Ronnie James Dio, leading the way to critical acclaim.

But what separates this autobiography from a history book is that it is told in a very humorous way.

Some of the chapters are just hi-jinks between band members, like when Iommi lit up Black Sabbath drummer Bill Ward’s beard on fire just for a laugh, or the times Iommi would drop off lead singer Ozzy Osbourne at a house that looked like his own in the early hours of the morning after gigs. With Osbourne being half asleep, he would knock on the door thinking it was his, falling for it every time.

Iommi also gets sentimental when he talks about his several marriages and divorces, which he has not been too open about before. He describes his relationship with his daughter and the custody battle he had to go through to take her back from her home in Los Angeles to his home in England.

All in all, “Iron Man” is a must-have for any music fan. It recounts the history of one of the most influential rock bands from the point of view of the Godfather of Heavy Metal himself. Without Iommi’s technique and memorable riffs, and Black Sabbath’s doom, gloom and attitude, music would not be the way that is today.

The book was released by Perseus Books/DeCapo Press in early November and is available in stores and online.