Greek Myth Lives On in ‘Immortals’ 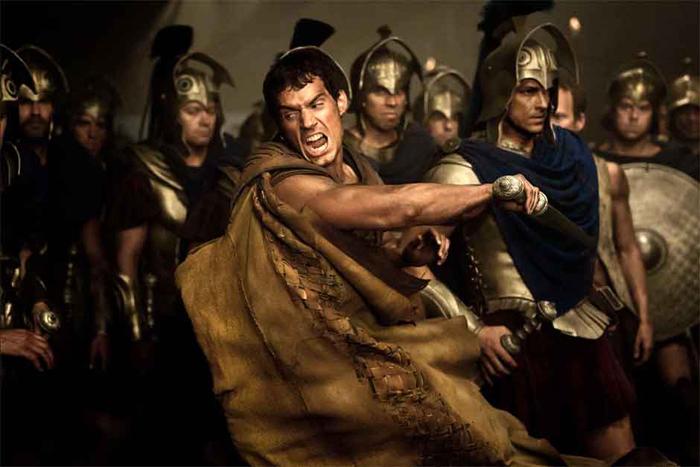 Fans of Greek mythology who are still reeling from the pain from last year’s snooze fest, “Clash of the Titans,” shouldn’t avoid this year’s visually stunning but flawed fall blockbuster, “Immortals.”

“Immortals” is directed by Tarsem Singh (“The Fall,” 2006). The screenplay is by sibling duo; Charley and Vlas Parlapanides and is adapted loosely from the ancient Greek mythology of Theseus.

The film stars Henry Cavill of the “The Tudors” as the film’s hero, Theseus, a peasant trained by an old man, played by John Hurt (Ollivander from the “Harry Potter” films). That old man is actually Zeus in disguise, played by Luke Evans (“The Three Musketeers,” 2011).

The plot thickens when King Hyperion, played by Mickey Rourke (“Iron Man 2,” 2010) who is on a quest to find the Eprius Bow and unleash the Titans to destroy the Olympians and claim himself as a god, raids Theseus’ village and kills his mother and makes him a slave. Hyperion isn’t exactly an ideal house guest.

Theseus escapes with the help of an oracle, Phaedra, played by Frida Pinto (“Rise of the Planet of the Apes,” 2011) and a thief, Stavros, played by Stephen Dorff (“Bucky Larson,” 2011). The trio then embarks on a journey to slay Hyperion.

Singh continues his signature style from his previous films, “The Cell” (2000) and “The Fall,” and creates a visually stunning movie. From the gold and sparkling costumes, the large set pieces cleverly blended with CGI and striking cinematography, Singh’s art direction is a constant treat for the eyes.

Singh offers a contrast to the gorgeous imagery with its beautifully choreographed yet brutal action scenes. Most of the fight scenes move at a brisk and violent pace. There are also quite a few scenes in slow motion but it isn’t overdone and is mostly used when the gods partake in the battles.

Despite being eye candy, the storytelling and editing aren’t as graceful. Unlike Singh’s magnum opus, “The Fall,” “Immortals” lacks character development as well as exposition.

Although established in the mythology, Theseus’ relation to the gods is only explained as “he’s been touched by the gods.”

Audiences unfamiliar with Greek mythology might be confused with the names of the gods as most of their names aren’t mentioned.

There are major changes to the mythology as well. Theseus’ famous battle with the minotaur is in the film but it’s context and scope is significantly changed to match the rest of the film’s plot. There are also deaths of Greek gods in the film which are drastically different from their fates in the ancient tales.

Although these changes may come across as disappointing to some viewers, the changes are understandable considering the convoluted nature of the mythology as well as simplifying and condensing a story for a two- hour movie.

The editing towards the end stumbles. Some of the transitions between the three major battle scenes that occur at the same time prevent the viewers from becoming emotionally invested in each one.

There is also a very noticeable continuity gaff during the death of a major character. His mouth is covered in blood in one shot, then the next shot shows his mouth clean, and then back to being covered in blood again.

It is by no means a perfect film or completely faithful to the mythology but succeeds in creating a visceral and visually satisfying experience. Most importantly, it’s entertaining.

The movie runs 110 minutes and is rated R for strong bloody violence and a scene of sexuality.