Cars and Dialogue Ride Side By Side in ’Autobahn’ 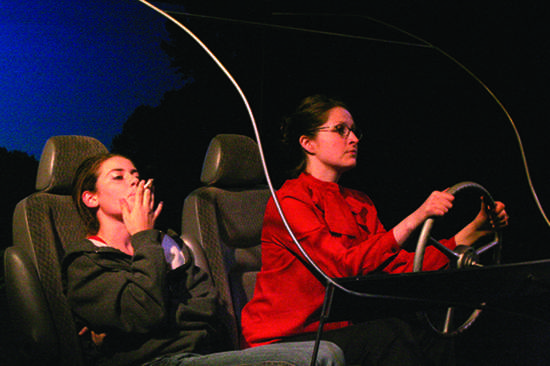 Neil LaBute’s “Autobahn,” a play cycle focusing on the nature of conversations inside of a car, opened at Glendale College on Oct. 26 at the Auditorium.

First written in 2003, “Autobahn” is unlike any of LaBute’s other works. It’s a collection of seven short plays — four monologues and three conversations. The cast is a motley crew ranging from a timid man who can’t seem to muster the will to break up with his insecure girlfriend, a driving instructor and a high school student on a secret road trip, and more.

The play starts without visuals, but rather a synthesized, ambient piece that sounds like it came out of an 1980s space program documentary — taking viewers to another world. And in a sense it’s appropriate — for “Autobahn” takes the audience to an oft unseen world, that of the privacy of a car seat conversation. “Autobahn” explores the certain openness that comes from a long drive, the fact that people can speak their mind and not easily escape the conversation.

A somewhat timid man (Guillerme Zaidan) and a clingy girlfriend afraid of abandonment (Ashley Regan) are the focus of “Bench Seat.” Awkward conversations and even more awkward kissing sessions fill what was supposed to be a break-up scene (and the man almost succeeds thrice). As the scene goes along, the man learns that his girlfriend has had a past filled with abandonment and that she copes with it in a unsettling way.

“Merge” touches on the confusing reiteration of a traveling businesswoman’s trip (Sara Tokumoto) and her worrisome husband (Peter von Sholly). The scene starts out innocently enough — a husband frets over a vague incident with two men (or as she likes to say, “all the men”) that happened to his wife on a business trip. As the scene carries on, the inconsistencies in the wife’s retellings and her language give way to the notion that maybe there’s something more than what she’s saying. Just maybe.

Perhaps the creepiest of all of the scenes, “Road Trip,” takes place on a highway in the middle of rural America — or for all intents and purposes, the middle of nowhere. A driving instructor with closeted anger problems (Zaidan) and a cute, tomboyish yet innocent high school sophomore (Micha Jones) are on their way to a secluded cabin for the weekend, at the instructor’s suggestion. There really is no need to say more; the true nature of the trip becomes apparent as the scene carries on.

The beginnings of each scene are vague, forcing the audience to pay attention to what the characters say. Then, as the backstory pieces together and the situation becomes clear, the hidden message reveals itself — that his wife doesn’t really like him, that she’s a bad parent, that something bad and traumatizing will happen to her upon reaching their destination.

The actors bring life into each of their roles, keeping the audience engaged despite the physical restrictions that come with acting inside the awkward comforts of a wire-frame car. Regan’s retelling of her past (and Zaidan’s quiet horror) in “Bench Seat,” Alexis Crisanto’s anger and frustration in “All Apologies,” Tokomuto’s addled and murky retellings in “Merge,” and Jones’ innocence in “Road Trip” were among the better portrayals in “Autobahn.”

Most of the stage is dark (especially during “Bench Seat”) with a screen behind the car providing the background scenery for each scene. Backgrounds usually contain various roads, but a couple are different — a city skyline and a neighborhood block. During transitions, the screen comes to life as actors drag each other offstage, storm off, tango their way in and more.

Like “The Shape of Things,” music is only played during transitions. Most of it sounds like synths from the 1980s and 1990s mixed with dashes of dubstep and a hint of house and techno. Background ambiance is played during each play, ranging from light rainfall to crickets

to tire on gravel.

The main focus of “Autobahn” is on what the actors are saying, rather what they’re doing. If action is your thing, you might want to steer clear of this one. For a firsthand look at the way humans treat each other when alone in a car, “Autobahn” should put you in the driver’s seat.

Adult themes and language are present in the production. Audience discretion is advised.