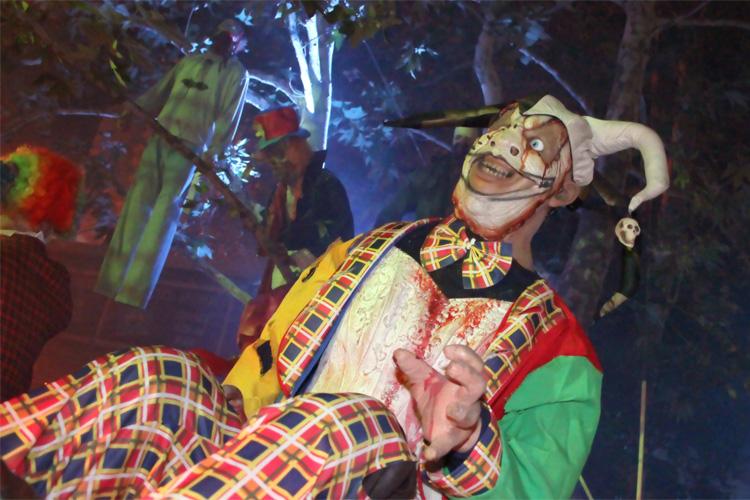 It’s that special time of year — weeping ghosts, flesh-eating zombies and serial killer clowns — Halloween must be near.

Halloween Horror Nights is currently underway at Universal Studios Hollywood and this year’s event is bigger than ever.

The maze, based on the “Hostel” films, has visitors walking through rooms in a Slovakian torture house. Early on, a “scare-actor” portraying a member of the fictional society, Elite Hunting, tells visitors how he is going to enjoy his kill while guests enter the torture rooms.

“This was the best maze out of all of them,” said Emily Ordonez, 13, Los Angeles.

“I thought it looked very real. This maze had the best acting and effects so far,” said Yesenia Padilla, 15, Los Angeles.

“I thought it was a-mazing and it smelled like cat urine,” said Manson. “Who let the dogs out? Eli Roth did.”

The original shock-rocker, Alice Cooper, had his own maze called, “Alice Cooper: Welcome to My Nightmare,” which was another of this year’s newest additions.

This maze was based on Cooper’s 1975 concept album “Welcome to My Nightmare” and its newly released sequel, “Welcome 2 My Nightmare.”

Unlike “Hunting Season,” this attraction features surreal macabre imagery such as mutilated and twisted bodies, large snakes, and a large and grotesque black widow. Most of the scare-actors in this maze are all dressed up as different variations of Cooper, who leap out at unsuspecting guests at almost every single turn.

The classic Backlot Tour has received its annual Halloween makeover and this year’s incarnation is called “Terror Tram: Scream 4 Your Life.”

Visitors walk through large outdoor mazes and sets such as the impressive airplane crash from “War of the Worlds” (2005) and Bates Motel from “Psycho” (1960). Of course it wouldn’t be Horror Nights without zombies roaming the crash scene as well as dozens of “Ghostface” killers from the “Scream” franchise.

Although this is the lengthiest maze in Horror Nights, the Scream section is also the most uninspired one. Besides a few changes, the Terror Tram is still largely the same attraction from the past few years.

Guests will also walk through campgrounds crawling with hideous and blood-thirsty hillbillies as well as trek along a brief dirt trail with growls and snarls emitting from behind trees and bushes.

The upcoming prequel to John Carpenter’s 1982 sci-fi horror remake, “The Thing,” is also among this year’s new mazes. “The Thing: Assimilation” takes visitors through sets inspired by the film as well as mutated monstrosities popping out at every corner.

“Assimilation” shouldn’t be avoided by guests as it’s one of the best attractions in the event.

The legendary horror film icon, “The Wolfman,” is featured in an attraction called “The Wolfman: The Curse of Talbot Hall.” This labyrinth is essentially the standard “House of Horrors” maze but with an extra emphasis on werewolves. Unless visitors have already gone through every attraction, “The Wolfman” can be avoided as the rest of the attractions in Horror Nights are far more entertaining.

Mexican legend “La Llorona” stars in her own attraction in this year’s Horror Nights. This maze, under the creative consultation from acclaimed actor Diego Luna, is short but creepy. Due to its length and the overall monstrous lines for the other mazes, guests might want to avoid “La Llorona” unless they have seen the other attractions.

Dr. Satan and other Devil’s Rejects reappear in “Rob Zombie’s House of 1000 Corpses: In 3D ZombieVision.”

The attraction, back by popular demand, takes visitors through a carnival-style journey through exhibits featuring ghastly serial killers. To accommodate the 3D glasses, the maze features a lot of sharp contrasts in red and blue. The strobe lighting in earlier parts give “House of 1000 Corpses” a chaotic feel.

Bill and Ted return for the fifth time in Horror Nights history in “Bill and Ted’s Excellent Halloween Adventure.” The 30-minute show satires celebrities and pop culture and throws in time travel for good measure.

Visitors looking for something other than mazes are in luck. While most of the rides are closed during Horror Night hours, three remain open; “Jurassic Park—In the Dark,” “Revenge of the Mummy—The Ride” and “The Simpsons Ride.”

For those who love horror and love to be scared, this year’s Halloween Horror Nights at Universal Studios Hollywood is not to be missed. “The Wolfman” can be avoided while “Assimilation” and “Hunting Season” are this year’s best mazes and shouldn’t be avoided.

Ticket prices are $62 but can be $5 to $10 cheaper if bought ahead of time. Front of line passes are $99. For dates, go to http://www.halloweenhorrornights.com/hollywood/2011.