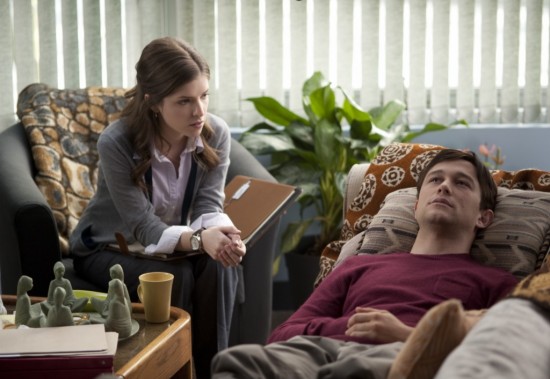 Life couldn’t be more cruelly ironic than in “50/50,” which is inspired by a true story. The 27-year-old main character, who doesn’t drink, smoke, or even have a driver’s licence because he thinks it’s too dangerous, develops a rare form of spinal cancer.

The title reflects the probability of survival, which was unsympathetically presented to Adam, played by Joseph Gordon-Levitt (“Inception,” 2010), by his passive doctor.

As if coping with cancer isn’t enough, there isn’t a single person in his social circle to turn to. Adam has an overbearingly protective mother, a father with Alzheimer’s, an unfaithful girlfriend, and a best friend whose apparent goal in life is to get laid as much as possible.

Adam and Kyle, played by Seth Rogen (“The Green Hornet,” 2011), embody a yin and yang friendship. Even after hearing the news, Kyle seems to act as if Adam just has the flu and it’s a wonder how Adam has the patience to deal with his immaturity. But if you consider the reaction of Adam’s family and friends, Kyle is the only one who doesn’t do the pity shoulder grab or look at him as if he were a time bomb.

Adam’s initial reaction to his illness is shock and disbelief but then he rather quickly becomes accepting — in a hopeless sort of way. He even prematurely shaves his head.

Adam’s hopelessness has a brief turn around when he meets his hilariously entertaining chemo-buddy cancer patients Alan, played by Philip Baker Hall (“Mr. Popper’s Penguins,” 2011), and Mitch, played by Matt Frewer (“Watchmen,” 2009). When one of them abruptly dies, he starts getting scared and feels a heavier impact that the same might happen to him.

The most powerful example of his fear is toward the end of the movie. The night before his last hospital visit, Adam drives his drunken friend Kyle’s car on a one-way street straight into oncoming traffic. Adam then kicks Kyle out of the car, screams to his lungs capacity and calls a friend to say good-bye.

The film is directed by Jonathon Levine (“The Wackness,” 2008) who hasn’t concocted anything remotely interesting in his seven years as director. However, “50/50” may be the first stage in his rehabilitation.

What I will give him credit for is his use of point of view shots. For example, when Adam first finds out he has cancer, the scene was shot through his eyes looking at the doctor and his vision blurs and words become muffled.

The music is also constructed well in accordance to the scenes. Soft acoustics are played during times of distress or else they play Beach Boys-type music, like when Adam gets high on the macaroon weed cookies his fellow 70-year-old cursing chemo companion gives him.

The storyline remains consistent in its gradual downward spiral of events. The events taking place in Adam’s life go by as quickly on-screen as it probably would in real life.

Other than Adam and Kyle, I was disappointed with the characters.

Gordon-Levitt delivers a great performance as Adam. He seems to have a knack for playing awkward and shy “boy next-door” roles.

Rogen, naturally, was responsible for 99 percent of the humor in the movie and displayed great chemistry as the best friend.

Aside from the knee-slapping performances from Alan and Mitch, the rest of the cast hardly supports the movie.

Anna Kendrick (“Up in the Air,” 2009) played the role of Katherine, Adam’s 24-year-old therapist-in-training. She is just as awkward as Adam and their chemistry isn’t believable. Kendrick is redundant and flat.

Adam’s girlfriend Rachael, the untalented artist, is played by Bryce Dallas Howard (“The Help,” 2011). She is very one-dimensional and the role could have been played by any cold-hearted, pretty girl in a shopping mall. I blame the writer for making their relationship so vague without a single dot to connect on how they came to be together.

Overall, “50/50” deals with the very real and depressing issue of cancer. The film is lighthearted and funny which is unrealistic in modern society. Not everyone with cancer reacts like Lance Armstrong who has been optimistically fighting testicular cancer for 15 years. So if you watch this film, understand that it is the cherry on top of the sugar-coated reality of cancer.